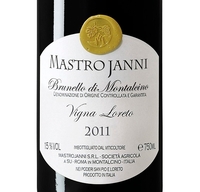 Though not the current release, Mastrojanni’s 2011 single vineyard, Loreto, is still available on the retail market and those who want to know why Brunello is such a revered wine should try it.  The only problem with the 2011 vintage in Brunello is that it followed 2010, a great one.  An advantage of the 2011s is they are earlier maturing than the 2010s.  In my mind, most Brunello usually need at least a decade of age before their glory shows.  But not this one.   It is now gorgeous to drink, combining dark core of mineral-like flavors with the black cherry-like flavors of Sangiovese.   Its suave texture just adds to its appeal and makes rich, but not heavy, wine a pleasure to drink.  Try it with a simply grilled veal chop.
94 Michael Apstein Aug 27, 2019