Even those who know little about wine recognize the name Châteauneuf-du-Pape.  Wine enthusiasts can name other important appellations in France’s southern Rhône Valley, such as Gigondas, maybe even Vacqueryas.  Really savvy consumers know that Vinsorbres, Rasteau and Cairanne, previously included under the Côtes du Rhône-Villages umbrella, have achieved their own appellations, and that Sablet and Seguret are two of the 21 named villages that remain under that umbrella.  But even the savviest consumer tends to overlook the Costières de Nîmes, the Rhône’s southernmost appellation.  And that’s a big mistake.  The wines are distinctive—Syrah rather than Grenache reigns here—and are now generally high-quality and well-priced.

It’s easy to understand why this area has been overlooked.  It’s located on the “wrong” or west side of Rhône River, whereas the most famous of the southern Rhône’s appellations lie on the river’s eastern side.  It’s so

far south and west, people assume its wines are included in the “lake of the Languedoc” and not a Rhône Valley appellation.  (It’s administratively part of the Languedoc, but vinously it hangs its hat on the Rhône Valley’s coat rack).  Up until three decades ago, the wines weren’t all that good because the post-phylloxera replanting and philosophy in the early 20th century was oriented to quantity, not quality.  However, that has changed dramatically since the Costières de Nîmes received AOC status in 1986.

Having spent many summers renting a house near Uzès, just outside of the Costières di Nîmes appellation, I have a broad familiarity with its wines and have watched their transformation from rough-and-tumble reds and heavy whites to polished and energetic ones.  So, I was thrilled to attend, via Zoom®, an in-depth tasting hosted by Evan Goldstein, MS and Michel Gassier, one of the appellation’s top producers, to update my familiarity with the appellation.

Gassier explains that the Rhône River is responsible for the rolled-rock soil of Costières de Nîmes just as in Châteauneuf-du-Pape.  The conventional wisdom holds that the rocks (galets in French) store the day’s heat, radiating it back during the night to enhance ripeness.  Gassier thinks that might have been their chief attribute 50 years ago, but now, with climate change, he believes the grapes need no heat boost to ripen.  He views the rocks’ asset both in Châteauneuf-du-Pape and the Costières de Nîmes as a water management tool.  As he explains it, the rocks prevent the soil from being compacted, leaving space for water accumulation.  Plus, water trapped in the rocks evaporates more slowly during windy conditions.

The soil coupled with the Mediterranean climate puts the region squarely within the Rhône Valley appellations.  What makes it different is its micro-climate, according to Gassier.  The Costières de Nîmes is the coolest 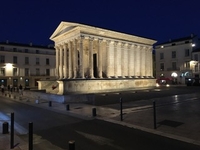 among Rhône appellations despite its southern locale because of the cooling influences of the Mediterranean and the marshlands of the Camargue, home to France’s famous wild horses.  As the sun heats inland locations during the morning, the overlying air rises, which draws in cool moist air from the Mediterranean and marshes, keeping daytime temperatures below 90ºF for much of the summer.  Photosynthesis, the process that creates energy for the vines, occurs best at moderate temperatures (54 to 90ºF).  The longer the vine remains within that temperature range, the more energy it has to promote phenolic ripeness, explains Gassier.

The combination of rolled-rock soil and the cooler growing conditions explains the predominance of Syrah, rather than Grenache, in the vineyards and in the red blends.

On a map, the Costières de Nîmes straddles the Languedoc and Provence and is, as Gassier puts it, the “balcony of the Camargue.”  The culture of the area is unique with a landscape populated by rice fields, roaming cattle and horses.  The bullfights here, sometimes advertised as “toro in piscine,” (literally bull in a swimming pool) are a game to see who 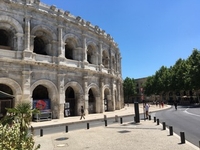 can induce the bull to jump into a child’s swimming pool.  Placing rings on the bull’s horns is another form of “bull fighting.”  No capes, picadors, or gore here.

The area itself has quintessential Provençal charm and has arguably the best-preserved Roman ruins outside of Italy.  Indeed, the Pont du Gard, a tri-level Roman aqueduct whose remarkable slope of one inch per mile, remains my favorite architectural landmark in all of France.  Also, in Nîmes itself is the magnificent Maison Carrée, a Greek-style Roman temple, and an equally impressive arena that looks like a mini-Colosseum.

Everywhere you turn in Nîmes, you come upon a crocodile.  A brass one, that is.  It’s the city’s mascot, the origin of which dates from Roman 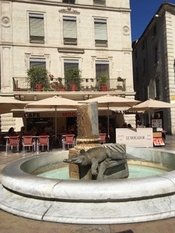 times.  The story goes that the Roman Emperors were constantly fearful that returning victorious generals could unseat them.  So, they bribed them not to return by bequeathing them new colonies to rule.  Nîmes was given to the general whose legion was victorious over Egypt.  That legion chose the image of a crocodile chained to palm tree as their logo.  The message was plain for all to see:  Here was the general and the legion that had subjugated the Egyptians.  The Romans have long since departed, but the mascot remains throughout the city.  The AOC Costières de Nîmes has adopted it as well.

The Costières de Nîmes appellation is a small area, containing about eight percent of the Rhône’s vineyards area.  An astounding twenty-five percent of its vineyards are certified as organic today, the highest in the Rhône Valley.  The ever-present winds help keep the vineyards free of disease.  The 71 producers and nine co-operatives produce roughly equal amounts (45%) of reds and rosés.

The red wines in general are less weighty and fresher than those from other southern Rhône appellations.  Though Syrah, Grenache, and Mourvèdre predominate, Marselan, Carignan, and Cinsault are also allowed.  Most blends are Syrah-heavy because growers prefer the lighter skinned Grenache for rosé.

The same grapes, just in different proportions, comprise the rosés.

The remaining ten percent of production consists of whites, chiefly from Grenache Blanc, Roussanne and Marsanne.  The white wines must include two of those three grapes, but Bourboulenc, Clairette, Rolle (a.k.a. Vermentino) and Viognier are also allowed.

The two white wines tasted during the webinar showed the wonderful range the category can achieve from this appellation.  At one end of the spectrum was the floral and lively 2020 Mas des Bressades “Cuvée Tradition” ($12, 89 pts).  Lacey and peachy with excellent acidity, it was like a refreshing summer breeze.  At the other end was Domaine Gassier’s 2018 “Nostre Païs” ($14, 92 pts).  More substantial, yet not heavy, its saline minerality and creamy texture cried for a place at the dinner table rather than the patio.  Both refute the notion that Rhône whites are heavy and flabby.

The rosés showed an equally broad spectrum.  The delicate, dry, and light 2020 Château Saint-Louis La Perdrix ($13, 86 pts) would go nicely with a summer salad or to chase away the heat of the afternoon, while the more powerful 2020 “Fleur d’Eglantine” from Château Mourgues du Grès ($26, 86 pts) displayed considerably more muscle under its pink hue.  It, too, had a cleansing, dry finish.

My experience over the years is that the red wines from Costières de Nîmes shine and should cement the appellation’s reputation as a source for fine wines.  The two reds shown during the webinar, unbeknownst to me previously, confirmed that impression.

The story of the label of the 2018 “Denim by Beaubois,” by Château Beaubois is as fascinating as the wine is delicious.  The label first.  Though the denim that Levi Strauss purchased, and turned his company into a household name, came from Genoa (Gênes in French, which seamlessly morphed into jeans), it originated in Nîmes, which was a major fabric center at the time.  (The word denim is a contraction of French phrase, de Nîmes, meaning “from Nîmes”).  A ying/yang of spice and black fruit succulence makes the 2018 Denim by Beaubois ($30, 92 pts) a joy to drink with grilled meats this summer.  Mild tannins allow it to take a chill.  It shows that powerful wines need not be heavy or overbearing.

With its more structured framework, the 2018 Château de Valcombe ($20; 90 pts) is more suited to the cellar than the table at this stage.  This blend of Syrah (70%) and Grenache effortlessly conveys the marvelous combination of savory and dark fruit flavors so often found in Costières de Nîmes reds.  Those who can’t wait (which would be understandable) should open and decant it a couple of hours before serving.

Over the years I’ve had many wines from Mas des Bressades, so any of their wines is likely to be a safe bet.  The 2018 “Nostre Païs” from Domaine Gassier, also unbeknownst to me prior to the webinar, was so impressive that I would jump at the chance to buy any of their other wines.  Same for the wines from Château Beaubois and Château de Valcombe.  In my experience, the reds from Château Mourgues du Grès are stunning and should be grabbed whenever you see them.  In alphabetical order, here’s a list of other producers who I heartily recommend based on past experience with their wines: Domaine Cabanis, Château de Campuget, Château Grande Cassagne, Domaine au Moulin Piot, Domaine de La Patience, and Domaine Terre des Chardons.

E-mail me your thoughts about Rhône Valley wines in general or the Costières de Nîmes in particular at Michael.Apstein1@gmail.com and follow me on Twitter and Instagram @MichaelApstein

Photo Credits:  Pont du Gard by Dee McMeekan; all others by Michael Apstein