BEAUNE, Burgundy, November 19, 2019:  First the good news.  The 2018 vintage produced large quantities of high-quality wines, both red and white.  It’s unusual to see good yields of high-quality wines in Burgundy, but that’s what happened in 2018.  Unlike the 2015 vintage, which I characterized as a “point and shot” vintage for the reds because the quality was so consistently

high that you practically couldn’t miss picking a fine wine, there is considerable variability among the 2018s that I’ve tasted.  No surprise there because, after all, this is Burgundy.  Look for more detailed reporting in future after the wines are bottled.

The just completed 2019 vintage looks to be of high quality as well, though yields were down by 50%.  Indeed, at the just completed 159th Hospices de Beaune auction, known locally as Le Vente des Vins, prices were up by about 20% overall.  Enthusiasm for the vintage was high at this early stage among critics.  In the 50 wines shown in the pre-auction tasting, I found an incredible consistency and raciness that balanced their richness.

The bad news is the mixed economic picture.  Both Gilles de Larouzière (the head of the organization that represents the major négociants in Burgundy) and Louis Fabrice Latour (the President of the BIVB, the professional organization that represents all of Burgundy) explained that the current economic picture was mixed.  On the positive side, both the volume and value of exports of Burgundy so far in 2019 reached record numbers.  On the other hand, there is considerable economic uncertainty for producers stemming from multiple sources:  Unrest in Hong Kong that perturbs that important market; continuing confusion about Brexit and possible peril for the British market, and protests by the the Gilets Jaunes (“Yellow Vests”) throughout France that have hurt 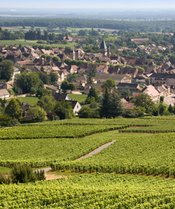 the supermarket business (where much of regional Burgundy is sold) while also discouraging sales to restaurants and bars as customers avoid areas hit by violence.

For us Americans, the 25% tariff on French wine under 14% alcohol by volume will likely chill the otherwise hot Burgundy market.  Though the tariff is 25%, the final increase to the consumer will likely be more as those in the distribution chain take their mark ups on prices that now include the 25% tariff.  Gilles de Larouzière, CEO of Bouchard Pere et Fils, says they cannot afford to reduce their prices to offset the tariffs, because their margins are already very thin.  Louis Fabrice Latour, who also heads that eponymous producer, thinks shipping in bulk to avoid tariffs is a terrible idea because the wine could be adversely affected in transport or even adulterated before bottling, and risks losing the Burgundian identity.  That said, the prospect of tariffs did not impede U.S. buyers at the auction.  Jeanne-Marie de Champs, one the very best brokers in the regions, noted that she had a similar number of American clients for whom she was bidding this year as last.
Posted by Michael Apstein at 8:57 AM