Granted, Ruché di Castagnole Monferrato is not the first wine people think of when they think of Piedmont.  Well, Agricola Ferraris shows us why it’s time to broaden our horizons.

First, let’s untangle the nomenclature.  Ruché (spelled Ruchè in Italian and pronounced roo-kay) is an aromatic red grape with excellent levels of malic acid that accounts for the wines’ freshness and vivacity.  Though pale colored, the grapes have the capability to impart considerable tannic structure, similar to Nebbiolo.  Castagnole Monferrato, a picturesque Italian hill village from which the Alps are easily visible on clear days, is located about six miles northeast of Asti and gives its name to the DOCG.  The soils vary from white (rich in calcium carbonate) to brown (with more clay), which means there is potential for great variability in a particular wine’s style, from tightly structured examples to ones that are more approachable when young.

When I visited the area a few years ago, a representative of the consortium than represents Barbera, Asti and Monferrato explained that in 1964, Don Giacomo Cauda, a parish priest in Castagnole, discovered a couple of rows of Ruchè in the church’s vineyards and decided to make wine from them, which he labeled Ruchè del Parroco.  From these few rows, the vineyard area expanded to about 125 acres by 2000 and currently to 375 acres spread over seven municipalities.

The Italian wine authorities recognized the wine’s quality and distinctiveness, awarding the area DOC status in 1987 and elevating it to Italy’s highest level, DOCG, in 2010.  The grape’s popularity may be spreading to California, where Bonny Doon’s Randall Grahm told me that he has planted three acres of it in San Juan Bautista and admits, “I went slightly Ruché mad.”  However, he is very happy with the 40 gallons (roughly 200 bottles) of it that he made.

Luca Ferraris, whose family-run firm is the largest vineyard owner in the DOCG, is the self-appointed ambassador for Ruché.  (Grahm refers to him as the “King of Ruché.”) Ferraris makes a range of excellent Ruché, including this trio that shows the extraordinary range of the DOCG: 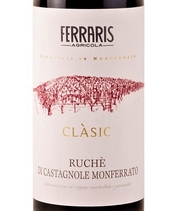 Ferraris, Ruchè di Castagnole Monferrato DOCG “Clàsic” 2020 ($20): Those looking for bold fruitiness should go elsewhere.  Here, the focus is on an alluring Middle Eastern spice box of aromas and flavors—cinnamon and cloves—and dried flowers.  Light on the palate, the flavors in this lively wine nonetheless persist.  You’d never realize it weighs in at 15% stated alcohol.  The potentially severe tannins of Ruché are nowhere to be found.  Ferraris has transformed them instead into fine ones that lend support, which makes it ideal for current consumption.  Try it even slightly chilled this summer.  Balanced and harmonious, this wine is for those who embrace the savory side of life.   91 Points

Ferraris, Ruchè di Castagnole Monferrato DOCG “Vigna del Parroco” 2019 ($23):  Ferraris acquired priest Don Giacomo Cauda’s Ruchè del Parroco in 2016 and renamed it “Vigna del Parroco.”  It remains the only officially recognized cru in the entire DOCG.  A gorgeous wine that still retains the savory focus, it is also more refined and complex than the Clàsic.  The spice box character is present, but toned down and, as a result, the wine is even more enchanting.  Its subtlety is captivating and makes you pay attention as the flavors change with each sip.  It has a “flavor without weight” sensibility that I find in Burgundy, or, for that matter, aged Barolo.  Though the tannins are fine, they provide plenty of support without astringency.  A zippy finish amplifies its charms.  Ferraris’ Vigna del Parroco, like their Clàsic, is not for those looking for a fruity wine.   Similar to the Clàsic, it’s beautifully balanced and carries the 15% stated alcohol effortlessly.   94 Points 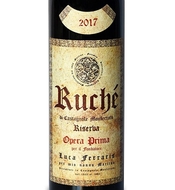 Ferraris, Ruchè di Castagnole Monferrato Riserva “Opera Prima,” 2017 ($40):  Luca Ferraris bottled this wine in honor of his nonno, (grandfather) Martino, the founder of the winery. Altogether different from Ferraris’ other two renditions of Ruché, Opera Prima, with its chocolate-y nuances, has an Amarone-like sensibility to it.  The fine tannins that are a hallmark of Ferraris’ wines together with a suave texture hold it all together.  You feel the 16% stated alcohol, yet it’s not hot or burning, just warm and enveloping.  In short, it’s balanced.  A subtle and attractive hint of bitterness in the finish adds to its appeal.  The Opera Prima has a black fruit component, but once again, the overall impression is not that of a “fruity” wine.  Unlike their Clàsic or even the Vigna del Parroco, both of which you could chill briefly and drink in the summer, the Opera Prima is clearly a wintertime wine for hearty fare.   92 Points