One definition of rogue is “something out of the ordinary.”  It is fitting, then, that the Naumes Family Winery is located in Oregon’s Rogue Valley, because they certainly do something out of the ordinary.  Ordinary, in terms of Oregon wine, is pretty clear: superb Pinot Noir and Chardonnay, and notable Pinot Gris.  While Naumes produces Pinot Noir, Chardonnay and Pinot Gris, they also 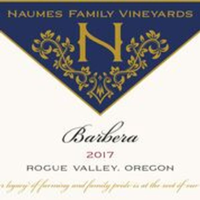 produce out of the ordinary wines, both in varietal composition—Barbera, Grenache, Syrah, Malbec, Mourvèdre, Viognier, Tempranillo—and most importantly, in quality.

The Rogue Valley, located in southern Oregon, bordering California, is named for the river that runs through it.  (French fur traders supposedly named it La Rivière aux Coquin [rogue] because they regarded the native tribes located there as coquins.)  Although the Willamette Valley is currently Oregon’s best-known wine producing region, the Rogue Valley was home to Oregon’s first official winery, Valley View Winery, established in 1873 by Peter Britt, according to the Oregon Wine Board.

The east-west orientation of the river and the surrounding valleys could explain the diversity of plantings because cooling Pacific breezes in the western-most part of the appellation allow varieties that prefer cooler climates, such as Pinot Noir and Chardonnay, to thrive.  The warmer and drier environment in the eastern areas are well-suited for varieties that need warmer conditions to achieve full ripeness.  But that broad generalization doesn’t explain the plethora of varieties of grapes Naumes Family Winery grows and wines it produces.   The varying elevations of the valleys’ hillsides also give growers flexibility for adopting plantings to local climatic conditions.

Corey Schultz, Naumes’ Winery Director, explains that it not as simple as the east-west orientation suggests.  They’ve been able to plant new varieties, Malbec, Barbera, Mourvèdre, Syrah, Viognier, Tempranillo, in addition to their existing ones, Pinot Noir, Chardonnay, Grenache and Pinot Gris, all within a 15-mile radius because of the variation of elevations, temperatures, and wind flow patterns, according to Schultz.  As an example, he told me that one day in August the temperature on the valley floor hit 106ºF while at the same time it was 64ºF in the vineyards on the slopes.

acidity that keeps it fresh and lively.  It conveys a splendid combination of savory, almost bacon fat-like nuances, spicy black pepper notes, and dark fruitiness. Though youthful and forceful, it is not overdone or boisterous.  Instead, there’s an appealing elegance to accompany all that muscle.  93

Naumes Family Winery Malbec 2017 ($35):  Full disclosure: Malbec is not my favorite wine because too often it is just a big monotonic red wine.  So, I was shocked when I tasted this one.  There’s lots going on—fruit, to be sure, but smoke-y and earth-y nuances peek out as well.  Uplifting acidity keeps you coming back for more. Glossy tannins are especially appealing and allow you to enjoy it now.  93

Naumes Family Winery Tempranillo 2017 ($30):  As much as I liked their 2016 Tempranillo, their 2017 struck me as even better.  Its firmness and minerality presents a great contrast to the fleshy and fruitier Malbec.  It’s structured without being aggressive or hard.  Its stature is apparent in the long and attractive hint of bitterness in the finish.  With air, its focus on minerality rather than fruitiness becomes more apparent. You could sip the Malbec by itself.   This serious Tempranillo needs a grilled steak.  94

Naumes Family Winery, “Tanto Manta” 2017 ($40):  This fifty-fifty blend of Tempranillo and Grenache marries the two beautifully.  The Tempranillo provides structure and minerals while the Grenache contributes a floral fruitiness.  More approachable than the straight Tempranillo at this stage, it would be a good choice with a hearty pasta dish tonight.  92

Naumes Family Winery, Pinot Noir, 2017 ($40):  Captivating herbal notes are immediately apparent in the nose and later on the palate. A blend of several clones of Pinot Noir, this is a

delicate and airy example of the varietal, displaying a wondrous mixture of savory and fruity flavors. Its focus is on elegance, not power or concentration. A perfect choice for grilled salmon.  92

Naumes Family Winery Pinot Noir “Clone 667” 2017 ($40):  I won’t get into the scientific definition of a clone as it relates to grape varieties.  Suffice it to say that in this case it’s a Pinot Noir with unique qualities.  The wine certainly is very different from their blended Pinot Noir, showing more fruit, more concentration and fewer earthy flavors.  In short, those who prefer more muscular Pinot Noir will embrace it.  90

Naumes Family Winery Pinot Noir “Pommard Clone” 2017 ($40):  If the Pinot Noir Clone 667 was the weight-lifter, this one is the ballerina.  Light in color and on the palate, it dances on the palate. It’s a captivating lighter style of Pinot Noir.  If you prefer the Clone 667, you won’t be enthralled by this one and vice-versa.  I’m enthralled by both because it shows that clones matter.  90

Naumes Family Winery Viognier 2018 ($30):  The Viognier grape is tough to translate properly into a wine.  Ripeness is necessary to release its inherent floral character, but over-ripeness results in a heavy wine.  Naumes strikes the balance. Lovely floral apricot aromas predict the stone fruit flavors that follow.  In a less well-crafter version, those stone fruit flavors would be heavy.  In this one, they’re bright, despite the 14.5% stated alcohol.  92
Posted by Michael Apstein at 6:25 PM