One of the great things about Italian wines is that so many notable ones, both white and red, fly under the radar.  Everyone’s familiar with the great wines of Tuscany, Chianti Classico and Brunello, to name just two, and from Piedmont, home to Barolo and Barbaresco, but these wines often command triple digit prices, commensurate with their reputations.  My advice is to explore other regions, such as Sicily, and especially Mount Etna.  Though Etna received that island’s first Denominazione Origine Controllata (DOC) in 1968, it still accounts for only about one percent of the island’s wine production.  And it’s only been in the last couple of decades that more than a few producers have explored and embraced its unique and challenging terroir.  (Most winemakers worry that rain at harvest could ruin a year’s work.  On Etna they worry that an eruption could wipe out a decade or two of work.)  In 2017, none other than Angelo Gaja, arguably Italy’s most well-known producer, purchased about 50 acres on the slopes of the volcano.  To quote Daniele Cernilli (a.k.a. Doctor Wine®), one of Italy’s top wine experts and critics, “The attention from a producer of such great and recognized prestige has confirmed the undisputed value of the volcano’s terroir, strengthening its image and consolidating its position among the most interesting areas in the world for wine production.”  Now, as you’ll see below, Etna’s wines are not inexpensive, but they are amazing for what they deliver.

One of Sicily’s top producers, Donnafugata, has been exploring the different lava-influenced terroirs on Etna.  If you haven’t tried their wines from Etna, or any wines from Etna for that matter, you’re in for a real treat; they’re the kind of wines that make you wonder—why haven’t I heard about these before now?

Donnafugata, still family-owned and one of Sicily’s top producers, has finally made it to Mount Etna, Europe’s highest active volcano.  They had their sights on viticulture on Etna about 20 years ago, but got side-tracked to Pantelleria, an island off Sicily’s southwest coast.  Fortunately, that detour resulted in the birth of Ben Ryé, a wonderful sweet wine (DOC Passito di Pantelleria) made from the Zibibbo (a.k.a. Muscat of Alexandria) grape that has savory undertones and bracing acidity, making it a perfect accompaniment to a cheese course or to act as dessert by itself.  I, for one, am glad they finally made it up the mountain because they are making stellar wines there that erupt with flavor.

Though Donnafugata’s first vintage on Etna was the 2016, they do have old vines because they purchased and rehabilitated vineyards, some of which are 80 years old.  While no one can say for certain why old vines produce better grapes, and hence, better wines, every winemaker I’ve ever spoken to agrees that they do.

Etna’s a hot area, both literally and figuratively, for stellar white and red wines made from the autochthonous grapes, Carricante, Nerello Mascalese, and Nerello Cappuccio.  Though Donnafugata’s historic home is in Marsala on the opposite, western, side of the island from Etna, they’ve established estates all over the island since 1983 when Giacomo Rallo founded the company.  With about 50 acres, their Etna property is the smallest of their four estates.  (For completeness, Donnafugata has just over 700 acres in Contessa Entellina, 90 acres in Vittoria, and about 170 acres on Pantelleria.)

The Etna DOC encompasses about 2,700 acres in a reverse C arc around the volcano’s northern, eastern and southern sides.  The same three basic components that explain the distinctive quality of great wines around the world are present on Etna: a unique climate, a unique soil, and unique grapes.  Despite being in the middle of the Mediterranean, Etna’s elevation gives it a continental climate, characterized by cold winters, wet springs, and hot summers.  Snowy winters and rainy springs provide ground water for the vines during the hot dry summers, while the large day-night temperature changes during July, August, and September maintain acidity in the grapes and hence, the wines.  The volcanic soil from successive lava flows, known locally as sciare (literally, to ski), imparts a distinctive mineral component to the wines.  The grapes, Carricante for the whites, and Nerello Mascalese and Nerello Cappuccio, for the reds, are unique and grown practically nowhere else. 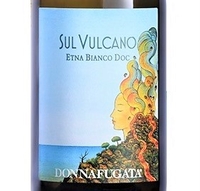 Carricante, an aromatic white grape, typically displays fabulous acidity and a distinct sapidity or saline touch.  Donnafugata’s 2018 Etna Bianco DOC “Sul Vulcano,” made entirely from Carricante, displays an immediately engaging floral component.  A crisp and chiseled wine, it captures the best elements of that grape.  This paradoxically vibrant yet restrained wine starts to blossom after 30 minutes in the glass.  Its refreshing, saline-tinged acidity keeps it fresh, and you coming back for more, throughout the meal.  This mid-weight mineral-laden white is just what you want for the hot and humid months ahead.  (95, $40).

Nerello Mascalese, like Nebbiolo, often lacks color despite substantial tannins.  A high-acid grape, it delivers both fruity and savory elements.  Nerello Cappuccio, in contrast, has great color, soften tannins, and a larger fruit profile, which makes it an excellent choice to blend with Nerello Mascalese. 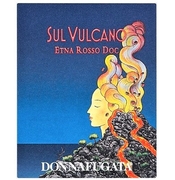 Donnafugata’s 2017 DOC Etna Rosso “Sul Vulcano,” a blend of Nerello Mascalese and Cappuccio, is a seductive mid-weight red that marries red fruit flavors with a distinct lava-like minerality.  Not an opulent wine, it has a lovely austerity without being hard or astringent.  Indeed, it’s clean and elegant with an exceptionally long and refreshing finish which makes it perfect for current consumption this summer with grilled meats or seafood in a tomato sauce.  (92, $35)

Donnafugata is exploring how wines differ depending on where the grapes grow.  During a Zoom tasting earlier this month, José Rallo and Antonio Rallo, the sister and brother team running the company now, explained that there are over 100 distinct areas, locally called contradas, which are determined by lava flows.  The contradas, which vary in size from 5 to 10 to over 100 acres, have a distinct and unique microclimate despite their often close proximity, according to Antonio.  He explains that the contrada Montelaguardia, whose soil is a result of a 1614 to 1624 eruption, and the cooler contrada Marquesa, whose soil date from a different eruption, are only a couple of miles apart, but produce different wines. 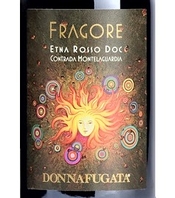 Donnafugata’s 2017 Etna Rosso “Fragore” from the Contrada Montelaguardia, made entirely from Nerello Mascalese, is denser than Sul Vulcano Rosso, but paradoxically, still displays a wonderful austerity.  This is no fruit bomb.  Indeed, the power and concentration have a lava-tinged savory character.  As expected from a monovarietal Nerello Mascalese, the tannins are more apparent, but are finely honed, not astringent or green.  Good acidity keeps this muscular wine fresh and invigorating.  The name, fragore, which means the sound or the roar of the eruption, is appropriate because of the wine’s energy.  This Fragore just needs time, maybe five years, to blow off steam and settle down.  (95, $85).

Time will tell whether the wine world will know the contrada of Etna as well as the villages of Barolo or the vineyards of Burgundy.