I love Sauternes, but rarely drink that sweet wine.  One reason is that the classic combination of foie gras and Sauternes hardly ever comes up these days.  But the major reason is that a little goes a long way.  One glass as dessert is divine.  Two is overkill.  I relish Sauternes with cheese, most of which go far better with sweet wine than with red wine, but am reluctant to open and then potentially waste the remainder of a 750-ml bottle, or even a 375-ml half-bottle, just to have a glass.  But what if you needn’t discard the rest of the bottle?  What if you could indulge and have that small glass of Sauternes whenever you wanted without having to invest in a Coravin®?  What if just recorking the bottle and refrigerating it would allow you to have another glass a few days later?  There would be no guilt in opening—and not finishing—that half-bottle of 1990 Château Rieussec you’ve been cellaring.  The scientist in me said, “Let’s do an experiment to find out.”

But first, a word or two about Sauternes, a region in Bordeaux that transforms Sauvignon Blanc and Sémillon into a sweet yet vibrant wine.  Usually, the blend is about 80 percent Sémillon and the remainder Sauvignon with a few producers using small amounts of a third allowable grape, Muscadelle.  In this part of Bordeaux conditions are perfect for the grapes to be attacked by a fungus, Botrytis cinera, often referred to as the “noble rot.”  The fungus punches tiny holes in the grapes, dehydrating them, which in turn, concentrates the grapes’ sugar and, very importantly, their acids.  Unfortunately, the grapes are infected haphazardly, forcing harvesters to pass through the vineyards several times to collect only the fungus-affected bunches.

The prolonged harvest combined with reduced yields from dehydration increases the cost of producing these wines.  Yet, despite that, Sauternes remain under-priced for their quality, precisely because of lower demand.  The affected grapes are fermented normally.  There is no pre-fermentation drying of grapes as there is in some parts of the world where other sweet wines are made.  Fermentation stops before all of the sugar has been converted to alcohol, typically resulting in wines with around 14 percent alcohol, up to 100 grams/liter of residual sugar, and higher than usual acidity.  Indeed, it’s the acidity that’s key, balancing the wine and preventing it from being cloying.  In my mind, the grandeur of Sauternes rests with its vibrancy, not its sweetness. 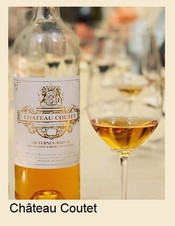 Now, the experiment.  Several years ago, I purchased six half-bottles of 2005 Château Coutet, which have rested quietly in my cellar.  Every night for six nights, I opened a new half-bottle.  I poured a small glass for my wife and myself, dated the bottle, but obscured the date with masking tape, re-corked it and placed it in our very cold (34ºF) refrigerator.  On the sixth night my wife and I tasted all six bottles without knowing when each had been opened to see if we could discern any differences among the wines.

In normal times, a group of tasters would have joined us for this blind tasting, but with COVID-19 in full force in Massachusetts, that was not possible.  Instead, I brought the blinded bottles to Fred Ek, another experienced taster, and asked him to rank his preferences.  Fred has more than 50 years in the wine business as a retailer, importer, and broker, having introduced Americans to the wines of Domaine des Comtes Lafon, Domaines des Baumard, and Maison Guigal, to name just three.

After un-blinding the bottles, two results stood out.  First, all of the wines—remember these are 15-year old Sauternes in half-bottles—were enjoyable with lovely apricot-y notes and brilliant acidity, and that includes the one opened six days earlier.  I’d happily drink any of them with cheese or as dessert.  Secondly, none of our rankings correlated with how long the bottle had been open.  Though both Fred and I identified correctly the wine that had been opened most recently, it was neither his nor my first choice.

A venerable estate, Château Coutet is one of only 11 properties classified as a Premier Cru in 1855 Classification of Sauternes.  It is located in Barsac, one of the five communes entitled to the Sauternes appellation.  (The other four are Sauternes, Bommes, Fargues and Preignac.)  Barsac is the only one with its own appellation, which producers can use in place of Sauternes.  Wines from Barsac tend to be livelier than the wines from the other communes, so perhaps that gave Coutet an edge in holding up nicely after being opened and recorked.

Would the same result hold true for a Sauternes from a commune known for more opulent wines?  I purchased six half-bottles of 2010 Château Raymond-Lafon, a non-classified but highly respected property located in the commune of Sauternes itself and repeated the experiment.  This time, to test the limits further, I opened a bottle every two or three days and then, as with the Château Coutet, tasted all six blindly at the end of the two weeks.  Peter Holt, who was wine director for 30 years at the now-closed and much-missed Anthony’s Pier 4, the legendary restaurant that had one of Boston’s greatest wine lists, acted as another judge.  Peter, it hardly needs to be said, has a long and vast experience tasting and evaluating Sauternes.  The results of this tasting were similar to those of the Coutet tasting.  All the wines were uplifting and balanced, even the one that had been opened for twelve days.  They were all lush and fresh, though less racy than Coutet.  Again, each of our rankings—Peter’s, my wife’s and mine—bore no relation to the length of time the bottle had been opened.

There are many potential explanations for the longevity of Sauternes after the bottle has been opened.  An obvious one, for which I could find no evidence, is that sugar acts as an antioxidant.  Alternatively, since these 10- and 15-year-old wines in half-bottles had already undergone the usual and expected oxidation during normal aging, perhaps additional oxidation from being opened for a few days was, as they say, lost in the round-off.  The answer could simply lie with the noble rot.  It is reasonable to think that something the fungus imparts to the wine—or perhaps the fungus itself—acts as an antioxidant, much like lees act as an antioxidant during fermentation and aging of dry wines, and keeps the wine fresh even after the bottle has been opened for two weeks.

We in the scientific community would call the results of this experiment preliminary, meaning that they need to be verified by others.  I suggest that you, the consumer, start the process of verification by opening a bottle—or half-bottle—of Sauternes, having a glass, re-corking it, and discovering how long it remains vibrant in your refrigerator.  My guess is you’ll have finished the bottle long before you would have thrown it out.