Livio Felluga’s Terre Alte redefines Italian white wine for me. Andrea Felluga, the current winemaker and general manager of the family-run firm, was recently in New York and led a vertical tasting of eight vintages 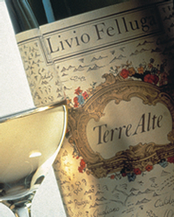 of Terre Alte, spanning 15 years, back to 1997, that showed how magnificently this white wine developed with bottle age. People marvel that a white wine could still be alive at 15 years of age–and truthfully only a small fraction of white wines, no matter their origin, are. But these Terre Alte weren’t just alive; they had improved and developed flavors than arise only from aging, while remaining fresh and vigorous.

You’d have to be living under a rock not to realize the quality of Italian red wines. With bottle age, they are capable of developing and evolving the way the best wines in the world do. Wines from Barolo, Barbaresco and Brunello di Montalcino can be majestic after a couple of decades of proper cellaring. Release and auction prices of the so-called Super Tuscans, such as Ornellaia and Sassicaia, reflect the public’s awareness of their stature and potential. Although not as widely appreciated, at least as reflected by their prices, Mastroberardino’s Taurasi wines are monumental with proper bottle age.

But what about Italian white whites? They certainly are a refreshing accompaniment to seafood, and Pinot Grigio, sadly, has become a synonym for “a glass of white wine.” For good reason, Italian whites are not taken seriously compared to their red counterparts. And, unlike Grand Cru white Burgundies, there are precious few Italian whites that require a decade to hit their stride. Scores of vertical tastings show the grandeur of white Burgundies, California Chardonnay, or the top dry or sweet white wines from Bordeaux, and consumers can purchase these wines at auction or even from retailers’ shelves. It’s rare to taste older Italian white wines and virtually impossible to obtain them unless you’ve purchased them on release and cellared them yourself because there are so few of them. Still, some Italian white wines do improve with age–and indeed, some, like Terre Alte, actually need bottle age before you uncork them.

A tasting of Gini’s Soave Classico La Froscá, going back two decades was eye opening. The 1995, at 14 years of age, had the wonderful balance of maturity and freshness usually seen only in mature white Burgundy. Similarly, a couple of years ago, a bottle of Mastroberardino’s 2002 Greco di Tufo–then a decade old–showed the majesty that the grape, in the right hands, can achieve. And just recently I had a marvelously complex, yet still vibrant, 1997 Sauvignon from Bosco del Merlo, a vastly under rated producer in the Veneto. Valentini often waits a decade before releasing his Trebbiano d’Abruzzo, a majestic wine that redefines that otherwise down-market grape.

Tom Maresca and Ed McCarthy, two of America’s leading experts on Italian wine, recently reminded me of a few other Italian whites from all over the country that improve with cellaring: Villa Bucci’s Riserva di Verdicchio Classico from the Marche, Benanti’s Pietramarina from Mt. Etna, Jermann’s Vintage Tunina and his Capo Martino from Friuli Venezia Giulia, Frescobaldi’s Pomino Bianco from Tuscany, and Antinori’s Cervaro della Sala from Umbria.

Livio Felluga, one of the great names in Italian wine, is regarded by many as the father of modern winemaking in Friuli, the name the locals given to Friuli Venezia Giulia, the region wedged between the Alps and the Adriatic on Italy’s northeastern border. As Andrea Felluga, Livio’s son, explains, “Prior to World War II, wine in Italy was considered food”–an enjoyable and easy way to deliver calories. Quality, to put it mildly, was not stressed. “After the war, the philosophy started to change. Wine went through a revolution.” Livio Felluga, along with other visionary Italian wine producers (such as Antinori, Frescobaldi, and Gaja to name just a few), showed that great wine could be made in Italy. In the 1980s, Felluga’s focus changed yet again, according to Andrea. He sought to make wine that would rival any in the world, not just in Italy.

Terre Alte, not surprisingly given its name (“high land,” in Italian), is located on top of a hill and is home to the oldest vines on the Felluga estate. When Livio purchased the 15-acre vineyard in the late 1960s, the vines were already about 50 years old. Andrea believes the key to the wine’s quality lies in those old vines. The vineyard–and the wine–is composed of Friulano with lesser amounts of Pinot Bianco and Sauvignon. (Friulano is the replacement name for Tocai Friulano, the traditional name of the grape, which had to be changed after Hungary convinced the European Union that Tocai should be used exclusively for their sweet wine.) The three varieties are harvested and fermented separately, with the late ripening Friulano coming in last. Andrea insists, “The key to great wine is complexity, and the blend adds complexity.”

Blending is in Friuli’s Blood

Andrea explains that the area is known for blending–and not just grape varieties, but entire cultures. Friuli has always been a border area. As such, it has been invaded and conquered multiple times in the two millennia since its founding in 83 BC by the Romans, each group bringing, and leaving, some of its culture–and grape vines behind. The region has seen itself as part of the border of the Republic of Venice, Napoleon’s Empire, the Austrian Empire, the Italian Kingdom, and later the nation-state of Italy itself. Livio’s hometown of Isola d’Istria exemplifies the character of the region: It was part of Italy at the time of Livio’s birth (1914), later became part of Yugoslavia, and currently is part of Slovenia. Andrea sums it up when he says, “Everything a blend–the culture, philosophy, the language and the wine.”

When Felluga first produced Terre Alte in 1981, it was classified as a humble Vino da Tavola, just as were the early vintages of the Super Tuscans, because the wine did not conform to the existing regulations. Although the wine has remained constant, its status has morphed from the lowly Vino da Tavola to a DOC wine, Collio Orientali del Friuli. In 2011, the government officially recognized its grandeur by awarding it DOCG Rosazzo status.

Although bottled, the 2012 Terre Alte ($80) has yet to be released. Andrea is reluctant to call it wine at this stage it is so closed and undeveloped. With its subtle creamy texture and hints of spice, the 2011 Terre Alte ($80; 93 pts), the current release, is a great young wine. Indeed, like great young white Burgundy, it blossoms only after being opened for a couple of days. Judging from how the older wines have developed, the 2011 needs at least five years before the cork is pulled. The 2009 Terre Alte ($160; 93) is only now starting to show minerality and complexity with the “not just fruit” type of flavors. Incredibly fresh and lively, there’s no rush to drink it.

The 2008 Terre Alte (not available; 94), lovely now, has a creamy lanolin-like texture, a hint of spice and ideal ripeness offset by invigorating acidity. The 2006 Terre Alte ($180; 95) has a glorious balance of richness and Sauvignon Blanc-like punch. The 2001 (NA; 96) has a real Burgundian sensibility with a creaminess, grace and freshness. The 1998 (NA; 94), though chronologically older, tastes younger than the 2001. It has marginally less creaminess but more energy. The still youthful 1997 (NA; 95) delivered almost caramel-y like mature flavors while maintaining a grapefruit-like zing in the finish.

To me, part of the definition of a great wine, whether red or white, is that it must evolve from bright fruity flavors into alluring non-fruit flavors–describe them as you like–as it ages, without losing vibrancy or freshness. Terre Alte does just that, which puts it with one of the great white wines of the world. (Terre Alte is imported by MW Imports, USA).