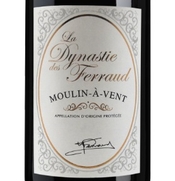 Though Ferraud’s wines have been in the U.S. market in the past, they currently have no importer, which is a shame because they consistently make distinctive Beaujolais.  (The prices I quote come from a world-wide averages.)   My experience with their wines comes from decades ago when they were imported and, more recently, drinking them in Paris bistros.  A tasting earlier this year in New York showed that they haven’t lost their touch.  La Dynastie des Ferraud originally was a barrel selection of their best wine, from any off the Beaujolais crus.  For the last seven years it has come from Moulin-à-Vent and has been made in conjunction with a Burgundy producer who supplies 3-year old oak barrels where the wine ages for six months on its fine lees.  Mineral-y and suave, it conveys a Syrah-like peppery quality that adds allure.  It is a powerful wine reflective of the superb and ripe 2015 vintage, yet it is not overblown or jam-y.  On the contrary, it’s refined and elegant despite its power.  Long and graceful, it shows the heights to which Beaujolais can rise.
95 Michael Apstein Jul 30, 2019