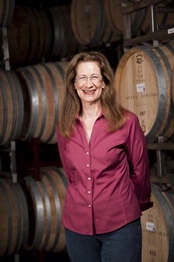 offerings several years ago, and is now off to a flyting start with Chardonnay as well, but superb Pinots remain the calling cards for her eponymous winery.

Edwards makes two regional Pinot Noirs, one from Sonoma Coast and one from Russian River Valley.  In addition she makes up to six vineyard-specific wines and a Reserve bottling.   Though they are all significantly different (these vineyard designations are not mere marketing ploys), three threads of stylistic continuity run through them.

First, they are robust wines reflecting California’s climate.  She is not aiming to make Burgundy–she makes California Pinot Noir.  That said, they do not fall into what I refer to as the “Pinot Syrah” category of over ripe, over extracted wine.  Second, their texture is suave and velvety despite plenty of structure that keeps them lively.  Third, they’re exciting to taste–and drink–because they evolve with time in the glass.  These are wines to savor.

Here are notes on a terrific set of current releases: 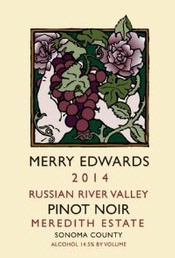 this stage, Merry Edwards’ Meredith Estate Pinot Noir says wow!  It’s a wonderfully complex mixture of dark fruit and savory flavors.  Both glossy and chewy (in a nice way) its contrasts continue to captivate throughout a meal.  It delivers New World opulence without a hint of exaggeration or flamboyance.  97

Merry Edwards, Russian River Valley (Sonoma County, California) Pinot Noir Coopersmith 2014 ($66):  Merry Edwards’ Coopersmith bottling, similar to the Meredith Estate, delivers refined black fruit flavors enrobed in suave tannins.  There’s also an alluring smoky or slightly toasted aspect to it.  It’s long and captivating.  Part of this wine’s excitement is that it is, indeed, different from the Meredith. Open them side-by-side with a group of friends and I suspect you’d get a pretty even split regarding preference. Another tell-tale sign of greatness is how beautifully this wine — and all her others — showed the next day.   96

Merry Edwards, Russian River Valley (Sonoma County, California) Pinot Noir Olivet Lane 2014 ($68): There are fewer savory elements in Merry Edwards’ Olivet Lane compared to the Coopersmith and Meredith, but the crystalline purity of the red fruit flavors is astounding.  The savory slightly mushroom-y nuances appear with time, with reinforces an important point when drinking (or tasting) her wines.  They develop in front of your eyes over hours so these are wines to savor and think about while you eat.   95

Merry Edwards, Russian River Valley (Sonoma County, California) Pinot Noir Flax Vineyard 2014 ($60): The Flax Vineyard bottling bombards the palette — in a very nice way — with lovely aromatics and juicy dark red fruit.  It speaks directly to you.  Savory elements appear, almost reluctantly, but then persist through a long finish.  Similar to her other Pinot Noirs, the tannins are suave giving the wine a velvety texture.  94

Merry Edwards, Russian River Valley (Sonoma County, California) Pinot Noir “Cuvée August” 2014 ($98): The grapes for Merry Edwards’ Cuvée August, named after her first grandchild and her most expensive Pinot Noir, come from the top part of the slope of the Meredith Estate.  A dazzling and explosive wine, its concentration almost borders on a “Pinot Syrah” style, but does not cross the line.  It’s just rich and savory and refined all at once.  Despite its power, it’s still closed and tightly wound.  At this stage, the “regular” (I hate to call it that) Meredith Estate is more expressive.  It will be fun to see how they develop over the next five to ten years.  94 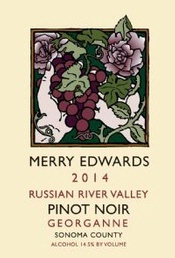 said, there is an appealing earthy, savory aspect that grows on you as the wine sits in the glass.  On day two of tasting, it’s still the most structured wine in this lineup, but not in an offensive way.  It just needs a few extra years of cellaring.  This is an excellent young Pinot Noir.  Cellar it while you enjoy some of Merry Edwards’ other bottlings.   93

Merry Edwards, Russian River Valley (Sonoma County, California) Pinot Noir Klopp Ranch 2014 ($66): Merry Edwards’ Klopp Ranch bottling highlights bright red fruit flavors with less emphasis on the savory component.  A succulent wine, it is balanced and pure with an alluring suppleness.  It strikes a gorgeous mid ground in terms of intensity.  I’m not sure that anyone, even Edwards herself, can explain precisely what it is about the vineyards that results in the different expressions of her wines.  But it’s clear that the wines differ one from the other.  It’s not a marketing technique.  Another unique and riveting Pinot Noir from Merry Edwards!   93

Merry Edwards, Russian River Valley (Sonoma County, California) Pinot Noir 2014 ($48): Also reflecting its origins, the Russian River Valley bottling delivers more black fruit-like flavors rather than the red fruit of the Sonoma Coast.  In contrast to the cooler Sonoma Coast bottling, this one is fleshier with a hint of savory notes. The fine-grained tannins contribute to its supple texture.   92

Merry Edwards, Sonoma Coast (Sonoma County, California) Pinot Noir 2014 ($45): Merry Edwards is one of America’s top Pinot Noir producers.  It’s always a joy to taste her new releases side by side because it’s clear that her vineyard or appellation designation is legitimate and not a marketing gimmick.  For example, this Sonoma Coast Pinot Noir, from a cooler area, reflects those growing conditions with more angularity and firmer lighter red fruit-like flavors.  It’s precisely the kind of Pinot Noir you’d expect coming from that part of California.   90