Record-breaking temperatures hit France and elsewhere in Europe recently with Beaune, in the heart of Burgundy, recording temperatures of over 100 degrees.  While those kinds of

temperatures are common in California wine country, they are rare in Burgundy and immediately raise the question:  How the vines and grapes faring?

Burgundy has seen warm vintages recently; 2015 and 2009 spring to mind.  Both of those years produced sensational reds and very good, but perhaps early-drinking whites.  Still, the temperatures in those years were not close to what Burgundy experienced this June.  The heat in June reminded people to whom I spoke about the canicule (dog days of summer, or heat wave) that occurred in August of 2003.

The persistently high temperatures during the day–and even more importantly at night–in 2003 altered the character of the wines.  High nocturnal temperatures draw down malic acid levels in the grapes, resulting in lower-than-usual acidity, which, in turn, especially for the whites, translated into flabby wines.  Compounding the problem in 2003 was that the heat came toward the end of the growing season, when it was dry, accelerating ripening.  Sugar levels in the grapes jumped unexpectedly and caught vintners off guard while they were away on their traditional August

vacation.  As a result, many grapes stayed on the vines too long and the many of the resulting wines tasted cooked or over-ripe.

Such outcomes were not uniformly the case, thankfully.  Showing how hard it is to predict how wines will develop, two 2003 red Burgundies that I tasted in 2016, both from Jadot–their Beaune Clos des Ursules and the Gevrey-Chambertin Clos St Jacques–I drank in 2016 were superb, fresh and still youthful.  There are exceptions to almost everything in the world of wine, but still…extreme heat certainly imperils the potential quality of fine wine.

The heat of 2019 is not that of 2003.  At least not yet.  Frédéric Barnier, Maison Louis Jadot’s very smart and talented winemaker, told me that he envisioned no damage so far, explaining that 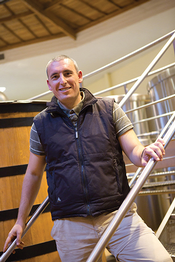 canicule is not a problem if the vines have water and leaves, which they do now because of lots of rain during the spring.  Indeed, he thought the extra heat helped, because the vines were behind schedule because of this year’s cool, rainy spring, and the heat allowed them to catch up.  However, he notes that more heat later in the growing season could be a big problem because now the ground is “dry, very dry.”  He felt bad for the growers who, unluckily, had performed rognage (leaf removal to expose the newly formed grapes to more sunshine and to help dry the bunches) just before the heatwave hit.

Megan McClune, the Managing Director at Domaine Jessiaume in Santenay, agreed that the dryness could be a problem because there has been little rain–and none is forecast for the next several weeks.

It’s impossible to assess a vintage until the grapes are in the winery and the wine has been made.  Even then, as those two 2003s from Jadot showed, early assessments of the wines can be faulty.  But at this point, Burgundy is on guard….