Mosmieri (Kakheti, Georgia) “Kakhuri” 2017 ($20, Corus Imports):  Georgian wines seem to be the rage these days, and there are plenty of possible reasons for that.  Consumers are intrigued that archeologists have figured out that wine has been made in that Caucasus-region country for 8,000 years, putting it among the oldest wine producing areas in the world.  The country’s relatively recent liberation from Soviet domination has resulted in a new-found focus on quality wine production, and its re-emergence is likewise a source of interest.

Additionally, much of Georgian winemaking is closely aligned with the wine world’s current emphasis on minimal-intervention techniques, a point made persuasively by Christine Deussen (of Deussen Global Communications, which represents Georgian wines in the U.S.A.).  Few objects embody this emphasis as dramatically as Georgia’s widely used qvevri, large, egg-shaped earthenware pots sunk into the ground for the fermentation and storing of wine (a practice that has received placement on the UNESCO Intangible Cultural Heritage Lists).  As Ms. Deussen also observes, the use of indigenous or autochthonous grapes rather than ubiquitous ones such as Chardonnay also makes Georgia’s white wines unique and fascinating.  (More on the reds in a future posting.) 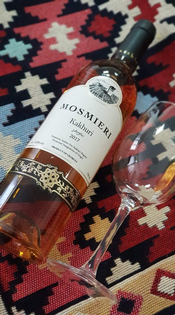 everyone’s liking, dedicated wine lovers need to try them anyway because some–like the one profiled here–can be superb with food.

Let’s start by trying to unravel the label.  Kakheti, a legally recognized and delimited area, is the major wine-producing region of Georgia, accounting for about 70 percent of the country’s vineyards.  Kakhuri, which means in the Kakhetian style and is the name of the wine, is confusing because other Georgian grapes use Kakhuri in their name–Kakhuri Mtsvani, for example, but usually called just Mtsvani.  (Mosmieri’s wine, however, is made entirely from Rkatsiteli, hence the potential for confusion.)  The label describes the wine as a “fine amber” wine.

The wine, though not made in a qvevri, is definitely a qvevri-style wine because the pressed grapes, skins and seeds are all fermented together for several months.  In typical white wine fermentation, the grapes are pressed, with the seeds and stems then being removed and discarded.  The juice undergoes fermentation for a week or two, not for months.  The grape, Rkatsiteli, indeed, should be less foreign to us than most Georgian grapes because Dr. Konstantin Frank makes a fabulous Rkatsiteli in upstate New York and labels it with the grape name.

True to its label, Mosmieri’s Kakhuri is amber colored and truly fine.  (Ms. Deussen says that many Georgians prefer “amber” as opposed to “orange” to describe the character of wine because of confusion with the fruit and the style of some orange wines.)  Mosmieri’s version is effectively a red wine masquerading as white because of the immediately apparent tannic impression on the palate.  Perfectly dry and clean, there’s not a hint of unpleasant oxidation despite the prolonged period of fermentation, which is what accounts for the subtle tannic feel and its amber color.

Its lack of annoying oxidative character differentiates it from many orange wines.  If you’ve been turned off by the orange wine category, here’s a good place to start again.  A substantial wine, Mosmieri’s Kakhuri cries for food.  This is not an aperitif-type sipper for use before dinner.  Powerful because the prolonged fermentation pulls flavors–and tannins and color–from the skins and seeds, it still weighs in only at a stated 13 percent alcohol.  Its acidity and concentration make it a great choice for–believe it or not–a hearty spiced lamb dish.  You’ve heard of red wine with fish.  Here’s white wine…or rather amber wine…with lamb.