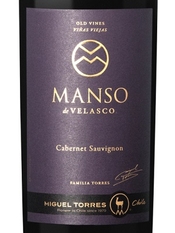 Named for Manso de Velasco, the Governor of Chile during colonial times and the founder of the city of Curicó, this Cabernet Sauvignon comes exclusively from 100-plus year-old vines grown on the estate of the same name.  The wine is, in a word, delicious.  Since the 2013 is the current release, Torres must hold the wine back until it has sufficient age to let its glory show.  And it does.  It’s beautifully textured with suave tannins that gracefully support its power and highlight its elegance.  It’s a big wine, to be sure, but not boisterous or flamboyant. Indeed, it’s quite graceful, combining layers of black fruit and savory nuances with a hint of smokey notes.  And its 13.5 percent stated-alcohol is a reminder that super ripe grapes are necessary for a wine of this stature.  It’s an ideal choice for current consumption with grilled meat, though I suspect it will continue to develop gracefully for another decade given its impeccable balance.  What’s curious is the contradiction between Torres’ well-known commitment to the environment and this ridiculously heavy empty bottle.  At 2.4 pounds, it’s twice as heavy as an empty bottle of the 1982 Mouton-Rothschild.  When will the marketing teams figure out that they may be turning off as many customers as they think they are impressing with bottles better suited for weight training than for wine.
96 Michael Apstein Mar 16, 2021