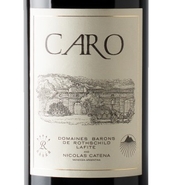 The name of the bodega and its flagship wine comes from the first two letters of the last names of the principals involved in this collaborative effort: Nicolas Catena and Barons de (Lafite) Rothschild.  With those two wineries involved how could their flagship wine not be consistently sensational?  Of course, it is.  The 2017, a blend of roughly three-quarters Malbec and Cabernet Sauvignon, practically the reverse of the 2016 blend, is equally splendid, just in a different way.  Philippe Rolet, the Managing Director at Bodegas Caro, told me in an email that in warm dry vintages, such as 2017, the blend favors Malbec, whereas in cold humid years, which are far less common, such as 2016, Cabernet predominates.  In the 2017, waves of black fruit-like flavors caress the palate.  Hints of minerals emerge from underneath.  Its texture is suave, yet not soft.  The plushness, which I assume comes from Malbec, is supported nicely by a bit of firmness imparted by Cabernet.  It’s powerful, but balanced and not overdone.  Indeed, there’s a gracefulness to the wine.  Delicious now, its balance suggests it will develop nicely over time.
94 Michael Apstein Dec 8, 2020