Maison Louis Latour’s 2015 Domaine de Valmoissine Pinot Noir (IGP Var, $14) epitomizes the difficulty of assessing wines by assigning a number to them.  Do you judge them among their peers or on an absolute scale? And how does value–ratio of enjoyment to price–figure in the final number?

Maison Louis Latour, unquestionably one of Burgundy’s top producers, startled the traditionally-focused and conservative Burgundy establishment by expanding outside of Burgundy while still using a traditional Burgundy grape, Pinot Noir in this case. In 1989, they purchased land in the Var 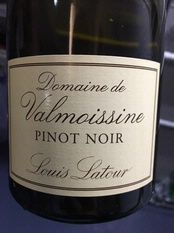 area of Provence in the south of France, betting that Pinot Noir, a grape with which they had vast experience and success, would do well there.

They were correct.  The 2015 Domaine de Valmoissine, a superb Pinot Noir, is likely their best ever.  It could be a perfect storm of vine age, 25-plus years of experience with the area, and a near-perfect growing season that explains the resounding success of this wine. More fruit-focused than a typical red Burgundy, but without the weight or sweetness that characterize many California Pinot Noirs, it still manages to capture the all-to-elusive savory quality often lacking in Pinot Noir-based wines from outside of Burgundy.  Although not a red Burgundy, despite being made from the grape of that region, it does have what I consider a hallmark of red Burgundy–flavor without weight.  The tannins are suave, which allows for immediate enjoyment.

So how to score it?  On an absolute scale where the fine Chambertins of the world would score in the high 90s, this one might muster somewhere in the low to mid-80s.  But, I’m not a fan of an absolute scale since I don’t think it’s fair to compare, for example, wines from Beaujolais with wines from Burgundy, or wines from Muscadet, which can be delightful, with Corton-Charlemagne.  I am an advocate for judging among peers, which of course requires the reader to have an idea of the composition of the group.  So, using the group of all non-Burgundy Pinot Noir, Louis Latour’s 2015 Domaine de Valmoissine would score in the high 80s or low 90s.

Now, once we consider price (and who among us does not?), we have an entirely different story.  Pinot Noir with real character less than $15 a bottle is rare.  At this price, this wine is a steal–the kind you buy by the case and drink slightly chilled in the summer with burgers or with grilled salmon, or in the winter, with roast chicken and mushrooms.  In the end, I think Robert Whitley, my colleague here at WRO, defines the numerical rating extremely succinctly and accurately–it’s an “applause meter.”  It’s how much I like the wine, everything, including price, considered.  Using that scale, Louis Latour’s 2015 Domaine de Valmoissine gets 95 Points (I can see my editor cringing, already).