A recent tasting of Beaujolais reminded me of tasting wines from the Côte d’Or.  Yes, you read that correctly–I am comparing Beaujolais and the Côte d’Or.  To be sure, I’m not speaking about just anywhere in Beaujolais, only the crus, the 10 villages in the northern part of the region whose bedrock is either pink granite or a blue-black volcanic stone and whose wines are so distinctive that only the name of the village, without a mention of Beaujolais, appears on the label. Despite different grapes (Gamay versus Pinot Noir), different soil (granite versus limestone) and different exposure (undulating hills versus a constant southeast facing slope), both the northern part of Beaujolais and the Côte d’Or are magical winemaking areas where the particular site is paramount in determining the character of the wine.

designated wines from Moulin-à-Vent and Morgon.  You’ll come away, as I did, amazed with the revelation that Beaujolais is not just a fresh and fruity wine.

The conclusion is inescapable: Beaujolais can be serious stuff and the Gamay grape is capable of extraordinary complexity. The wines reflect their sites, just as in the Côte d’Or, the more up-market part of Burgundy. At Château des Jacques, as well as at many other fine producers who focus on the uniqueness of specific sites, the wines are wonderfully different even though they are all made from the same grape–Gamay, in this case–by a winemaking team that uses similar techniques with each wine.  And this being Beaujolais, and not the Côte d’Or, you can actually afford to buy them.

Maison Louis Jadot, one of Burgundy’s best producers, purchased Château des Jacques and its vineyards in Moulin-à-Vent in 1996 and subsequently has expanded its presence in Beaujolais by purchasing estates and vineyards in Morgon and Fleurie.  With their emphasis on specific vineyard sites, Jadot and other producers are showing the world

that Beaujolais can offer the same thrilling diversity using Gamay, as the rest of Burgundy does with Pinot Noir.  Though Jadot’s goal is to show the distinctiveness of individual vineyards in Beaujolais, their flagship wines are the ones from the villages themselves, according to Cyril Chirouze, Château des Jacques’ talented and energetic winemaker.  It’s an analogous philosophy to that seen in Champagne where producers make distinctive vintage Champagne, but consider their non-vintage bottlings the standard bearer.

The 2015 vintage in Beaujolais, like the rest of Burgundy, is outstanding.  The growing season was hot and dry overall with the harvest starting in August.

(Climate-change deniers should note that August harvest occurred only twice during the entirety of the 20th century, 1947 and 1976, while 2015 was already the fourth time Beaujolais has seen such an early start in this new century.)

Yields were low in 2015, further concentrating flavors.  The allowable yield for the crus is 52 hectoliters/hectare (hl/ha), while the average at Château des Jacques in 2015 was 28 hl/ha.  The high acidity inherent to the Gamay grape is what makes the 2015 Beaujolais wines so stunning.  It balances the ripe flavors the sun delivered, preventing the wines from being jammy or overdone.  Chirouze notes with a smile, “The vintage is a gift.  It will put the spotlight on Beaujolais.”

The spotlight was on Beaujolais at the turn of the last century.  Moulin-à-Vent was made by traditional methods–not carbonic maceration–with long maceration and barrel aged, as evidenced by an old de-stemming machine Jadot found at Château des Jacques when they bought the property and from photographs from that era.  Chirouze reported that they discovered restaurant menus from the early 20th century indicating that Moulin-à-Vent sold at a comparable price to Volnay and Beaune.  He explains that Gamay stands up to (and benefits from) barrel aging as long as the grapes are de-stemmed, crushed and undergo prolonged, three to four weeks of maceration and fermentation, as is done with Pinot Noir in the rest of Burgundy.  Any wine, Beaujolais or Bordeaux for that matter, which undergoes protracted barrel aging requires time in the bottle before it is ready to drink.

After World War II, says Chirouze, fashions changed in Beaujolais.  Neither producers nor consumers wanted to wait for wines to age.  Producers wanted to sell their wines as soon as possible rather than tie up their money aging them.  Consumers wanted wines for immediate consumption rather than cellaring.  Enter Beaujolais Nouveau.  The formula here is simple: Whole bunches of grapes are thrown into the vat without destemming or crushing.  Fermentation begins within the berries and vinification is rapid, seven to ten days, rather than a month, which brings out the fruitiness but not the tannins.  The result is a light, fruity and fresh wine ready for immediate consumption–but has little character and transmits nothing of its origins.  During the past 20 years (from 1996 to 2016) Beaujolais Nouveau production has fallen by 60 percent (from 472,000 hl to 193,000 hl), but it still accounts for 27 percent of the region’s production, according to data from Inter Beaujolais, the trade group that represents the entire region.

Despite the longstanding prominence of Nouveau and the impatience that explains its advent, the pendulum in Beaujolais is swinging back toward seriousness.

In addition to the original eight separate parcels in Moulin-à-Vent, Château des Jacques has acquired three in Morgon and two in Fleurie, giving them a total of roughly 200 acres.  (Jadot also has an entirely separate winemaking facility and team in the region for their less terroir-driven Beaujolais Villages, which, by the way, delivers more than you’d expect for the price, especially the 2015 vintage.)

Chirouze is adamant that they will bottle single vineyard wines only when doing so does not “impair the quality and integrity of village wines.”  He continues, “The village wines–Morgon, Fleurie and Moulin-à-Vent–are not ‘second’ wines.  We bottle the single vineyard wines only if the vintage allows bottling of both.”  Hence, the number of single-vineyard bottlings Château des Jacques does depends on the year.  The grandeur of the 2015 vintage allowed Château des Jacques to bottle all

six of their single vineyard Moulin-à-Vent, La Roche, Clos du Grand Carquelin, Clos de Rochegrès, Champ de Cour, Clos des Thorins, and La Rochelle, without diminishing the quality of the village wine.  Only the first three, however, will be available in the U.S.  (They own two additional parcels, Les Vérillats and Les Caves, that they never bottle separately, reserving those grapes entirely for the village wine.)

Comparing the three 2015 single vineyard wines from Moulin-à-Vent is an epiphany-inducing experience.  You’re left with the same amazement as when you taste wines from Volnay, or any Côte d’Or village–wines made from same grapes grown in adjacent vineyards that somehow taste remarkably different.

The 2015 La Roche ($43, 94 points) lives up to its name–the rock.  The vineyard lies at the foot of the village’s icon windmill and has shallow poor soil atop volcanic bedrock.  Even the ripeness of the 2015 vintage does not soften this massive young wine.  Despite its concentration and perhaps because of its structure, it comes across as austere.  But it’s really not.  It has splendid freshness, which adds to its allure.  I suspect it will turn out beautifully with time.  (I just finished the last bottle of a case of the 2000 Château des Jacques La Roche–at 16 years of age, it was still fresh and marvelously mineral-y.)

The 2015 Clos du Grand Carquelin ($43, 95 points), from a vineyard across the road–not 10 feet away from La Roche–was entirely different:  Floral and elegant, long and graceful, almost delicate by comparison.

The 2015 Grand Clos de Rochegrès ($43, 95) 500 feet away as the crow flies, combined elements of both of the others, with gorgeous power but less refinement compared to Clos du Grand Carquelin.

Although Château des Jacques is adamant about the importance of site-specific bottlings, this is not a new idea.  Indeed, the previous owner of the property bottled a wine from Clos de Rochegrès for decades.  Nor 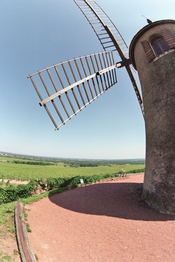 is Château des Jacques the only producer in Beaujolais to have that focus.  The single vineyard wines from Château du Moulin-à-Vent (which sits adjacent to the windmill) are stylish and reinforce the importance of site specificity.  Their Moulin-à-Vent from the Croix des Vérillats vineyard is consistently firm, reflecting the poor soil, with an uncanny elegance, while the one from La Rochelle, a south-facing plot with more soil atop the granite–and not more than 50 meters away–is richer and more opulent.

Moreover, site-specific bottlings are not unique to Moulin-à-Vent.  Other quality-oriented producers in other villages, such as Domaine Mee Godard and Château de Raousset, to name just two, have adopted the practice.  Godard bottles three distinctive–and different–wines from Morgon, from the lieux-dits Courcelette, Grand Cras and Côte du Py.  Château de Raousset has been bottling by parcel for about 15 years after they realized the wines from Grille-Midi, a parcel in Fleurie, had unique character.  They’ve added a Morgon from the Douby lieu-dit and even one from Chiroubles, Bel-Air, because they recently acquired sufficient acreage there to make a separate bottling practical.

Let me venture to make a prediction. The time will come–and soon–when the vineyard names in Moulin-à-Vent and the other cru will be as familiar to us as those in Chambolle-Musigny or Beaune.