Everyone knows THE grape in Beaujolais is Gamay.  Ok, a little Chardonnay, which finds its way into Beaujolais Blanc or even Bourgogne Blanc, is planted in the region as well.  But now, a game-changer could transform and revitalize the region–a major Burgundian producer has started planting and making wine from Pinot Noir in Beaujolais.  And the first vintage of it is very appealing. 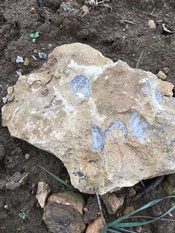 Maison Louis Latour, one of Burgundy’s top producers, took the plunge in 2012 and planted about 45 acres of Pinot Noir in southern Beaujolais, in an area known as the Pierres Dorées because of the golden color of the limestone rocks there.  Emeric Teyssou, who oversees the viticulture for Latour, notes that the soil in the Pierres Dorées is different from the remainder of Beaujolais where volcanic granite prevails.  Here, it’s more a marl limestone mixture similar to that found in the Côte d’Or.  It is abundantly clear that in prehistoric times the land in this area was under a vast sea because everywhere you look there are shell-like fossils in the stones.

There was one small, less than 2-acre parcel, that had been planted with Pinot Noir in the 1970s, which Latour kept, but the remaining parcels were replanted in a Burgundian fashion, more suitable for Pinot Noir than Gamay.  Most importantly, the new vines were trained on wires instead of the traditional gobelet system used for Gamay.

Immediately after harvest, the Pinot Noir grapes are kept cold and delivered by truck to the Latour winery in Beaune, a trip that takes only about one and a quarter hours.  Vinification is similar to Latour’s other red Burgundies.  Latour made only a few thousand bottles of the 2015, not enough to be imported into the U.S.  Although exact quantities of the 2016 have not been determined because the wine is still aging, Latour estimates they will produce about 30,000 bottles, which means that some will come to our shores.

The wine is bottled under a relatively new appellation, Côteaux Bourguignons, which allows any blend of Pinot Noir and Gamay, along with some other minor grapes, grown throughout Burgundy, including Beaujolais.  (Côteaux Bourguignons will replace the terrible sounding appellation, Bourgogne Grand Ordinaire, and Bourgogne Passetoutgrains, which currently allows the blending the Pinot Noir and Gamay.)

The 2015 Maison Louis Latour Pinot Noir “Les Pierres Dorées” is a smashing success, delivering juicy fruity notes buttressed by round mild tannins and a hint of savory, earthy notes.  It’s a perfect “roast chicken” kind of wine.  I can’t wait for the 2016 version to hit our shores….