No one is more responsible for the success of the California wine industry than Robert Mondavi. This year marks the 50th anniversary of 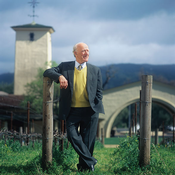 the winery that bears his name and is an appropriate time to look back on his extraordinary accomplishments.

There have been, and still are, many stars in the California wine galaxy.  Andre Tchelistcheff, Beaulieu Vineyards’ legendary winemaker from 1938 to 1968, made great Cabernet Sauvignon–and less well realized, but no less great–Pinot Noir.  Ernest and Julio Gallo sold more California wine–and their company still does–than anyone else.  But it was Robert Mondavi who convinced the world that California could make world-class wine.  And for those of us over 50, his accomplishments are all the impressive because he started his eponymous winery and his crusade for top-notch California wine when he was in his 50s.

To understand the magnitude of Mondavi’s accomplishments, we must remember the state of California wine in the mid 1960s when he left his family’s winery, Charles Krug, to start his own.  There were fewer than 30 active wineries in Napa Valley.  For comparison, the Napa Wine Project estimates there are currently more than 400 wineries and over 1,000 commercial wine producers in Napa Valley today.  Prices for land were measured in hundreds or thousands–not hundreds of thousands–of dollars per acre.  Although Beaulieu Vineyard, Inglenook, Louis Martini and others made excellent wines at the time, the preponderance of California wine was generic jug wine whose legacy remains a deep-seated prejudice among Americans against screw caps.  The famous tasting in Paris where California wines upstaged the French ones–with French judges no less–was still a decade away.  The truth was that until the mid 1970s very few people took California wine seriously.  Robert Mondavi changed all that.

Many wine regions have benefited from a locomotive that brings the region’s wines to international acclaim.  Angelo Gaja, in large measure, put Barbaresco and wines from Piedmont on equal footing with the world’s other great wines.  Piero Antinori with his ground breaking Tignanello and enormous energy did the same for Tuscan wine when the Chianti region was in the doldrums.  But unlike Robert Mondavi, none of them started with a region so far down the prestige ladder and managed to carry it to the top.

He was tireless and single minded in his crusade.  Many of my wine writing colleagues have told me the same story, so I know that my experience was not unique.  Whenever Mr. Mondavi would come to Boston to promote his wines, the format might be different, but the strategy never varied:  Drink a Mondavi Reserve Cabernet along side a first growth Bordeaux.  Sometimes he would moderate a blind tasting of five or six wines that included his and one or more first growth Bordeaux.  Other times at dinner he would encourage–demand really–a guest order a bottle of Chateau Lafite or any first growth Bordeaux on the wine list so all could drink it with his Reserve Cabernet.  Sometimes his wine was the group’s favorite, others times it was not.  But on every occasion, it was clear that the Mondavi Reserve Cabernet deserved to be on the same table.  And that was Mr. Mondavi’s point.

As with so many of Mondavi’s ideas, his marketing strategy has been copied and is used widely today.  New Zealand producers routinely show their Pinot Noir next to famous red Burgundies.  Chilean wineries sponsor “competitions” in which their Cabernet Sauvignon is in a line-up of world-renowned Cabernets.  The unspoken message is the same:  we deserve to be on the same table.

Robert Mondavi was a great mentor.  There is a long list of current and past California winemakers who worked in the Robert Mondavi winery and then went on to make names for themselves and their wineries:  Warren Winiarski, Miljenko “Mike” Grgich, Charles Thomas, Paul Hobbs, Zelma Long, Janet Myers, to name just a few.  Mr. Mondavi always encouraged them even after they left–and became competitors–giving advice to solve problems and to make better wine.  He would loan equipment when other winemakers were in a pinch.  Miljenko “Mike” Grgich relates how, in 1977, Robert Mondavi assured him that he (Grgich) could use the Mondavi winery to make his first vintage if Grgich’s winery wasn’t completed in time.  Grgich sums up Mondavi, “He was a generous man.”  This spirit of cooperation is rare in the wine world.  This kind of collegiality is not routinely found in Burgundy or Bordeaux.  Most winemakers and principals guard their proprietary information carefully, never to reveal their solutions to problems to competitors.

Mondavi knew that California was capable of producing great white wine as well as red.  Although he was not the first to bottle California Sauvignon Blanc, he made exceptionally suave wines from the variety and was the first to label them “Fumé Blanc,” a reference to Pouilly-Fumé in France, an appellation that used that grape exclusively.  The name helped the varietal’s popularity and is now used by hundreds of wineries throughout California.  Although some people thought Mr. Mondavi’s failure to trademark the name was a mistake, Peter Holt, a former Vice-President of Purchasing for the former California retailer, Liquor Barn, and a keen observer of the California wine industry, felt it was consistent with Mondavi’s desire to share what others might consider proprietary information for the good of the California wine industry.

His philosophy about wine was simple and constant, despite changing fads.  To him, wine should be consumed at the table, with food and friends.  The marketing description of “food wine” arose in reaction to the so-called “monster” or “killer” Cabernets that made an impact in blind tastings, but overwhelmed everything on the table and indeed, were not so great with food.  Mondavi, never a fan of that style of wine, continued to make the wines he liked to drink with food despite mounting criticism from some prominent wine reviewers in the 1990s.

In his honor and to see how the older Mondavi Reserve Cabernets have evolved, I dipped into my cellar shortly after his death in 2008 and just again this week to try the 1985, as he would have suggested, with dinner.  My notes for the 1985 Reserve Cabernet Sauvignon from 2008, when it was 23 years old, and from this week, at 31 years of age, were remarkably similar:  It was harmonious and still fresh–a seamless mixture of fruit and mature savory notes–with a supple texture.  It was perfect throughout the meal because each sip brought new flavors.  The 1991 and 1992, tasted in 2008, were less evolved–still exhibiting bright fresh red and black fruit flavors–but developing those engaging secondary aromas and flavors of cedar, tobacco and dried fruits.  They still have a long life ahead of them and more importantly, will continue to improve.  All of these wines contained less than 14 percent alcohol and none were considered “blockbusters” when they were released.  They have blossomed beautifully because they were balanced and not overripe or jammy upon release.  I, for one, am glad that Mr. Mondavi stuck to his guns.

Thank you Mr. Mondavi–Mr. California Wine.  The California wine industry would not be the same without you.