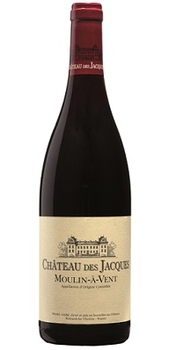 Beaujolais is still trying to remind people it produces real, top-notch wine, not just “nouveau.”  Well, Jadot’s Château des Jacques is a convincing exhibit.  For over 20 years, Château des Jacques has been instrumental in showing the diversity of wines from within the crus of Beaujolais, those ten named villages, such as Moulin-à-Vent, whose wines are so distinctive that they may not even carry the name Beaujolais on the label.  Château des Jacques makes up to six single-vineyard Moulin-à-Vent depending on the vintage as well as this one, a blend from their eight vineyards.  (Two of those eight are not bottled separately.)  The 2017 Château des Jacques is a terrific example of the heights Beaujolais can reach when the producer takes the area seriously.  Though the first impression an appealing floral character, its focus is on minerals, not fruit, though dark fruit flavors are present.  Firm, yet suavely textured, it is a fresh and lively wine.  It finishes with an attractive hint of bitterness, making it perfect for current consumption with a mushroom laded roast chicken.  It’s quite the bargain.
93 Michael Apstein Dec 22, 2020