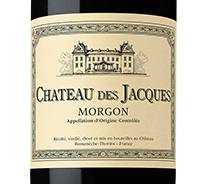 Anyone who doubts that Beaujolais can excite needs to taste Château des Jacques’ 2015 trio of Morgon, Fleurie and Moulin-à-Vent, three of the 10 Beaujolais crus.  The crus are 10 villages in the northern part of the region whose bedrock is either pink granite or a blue-black volcanic stone and whose wines are so distinctive that only the name of the village, not Beaujolais, appears on the label.  Maison Louis Jadot, one of Burgundy’s best producers, purchased Château des Jacques and its vineyards in Moulin-à-Vent in 1996 and subsequently has expanded by purchasing estates and vineyards in Morgon and Fleurie.  With their focus of specific vineyard sites, Jadot is showing the world that Beaujolais can offer the same thrilling diversity using only one grape, Gamay, as the rest of Burgundy does with Pinot Noir.   Though Jadot’s goal is to show the distinctiveness of individual vineyards in Beaujolais, their flagship wines are the ones from the villages themselves, according to Cyril Chirouze, Château des Jacques’ talented and energetic winemaker.  (It’s a philosophy seen in Champagne where producers make distinctive vintage Champagne, but consider their non-vintage bottlings the standard bearer.)  This Morgon, a blend of wines from several sites within the village, including the renown Côte du Py, is surprisingly lush for Morgan — then the firm backbone chimes in. It’s a study in power and freshness.  Great spice in the finish just adds to its allure.
92 Michael Apstein May 16, 2017