Hollywood could not have orchestrated the prelude to the Left Bank Bordeaux Cup any better.  On a breezy summer evening under a brilliantly blue sky, the judges, guests and contestants assembled on the beautifully manicured lawns outside the cellars of Château Lafite Rothschild, snapping pictures and chatting nervously.   After the judges

and contestants were whisked away, the guests were ushered down the dim candle-lit steps into Lafite’s breath-taking illuminated circular barrel room.  Then, from stage right, the contestants–15 men and 9 women–took their seats at the eight round tables, each with three chairs, arranged on the podium.  Finally, amid the regal sound of trumpets, the judges, 10 members of the Commanderie du Bontemps de Médoc et des Graves Sauternes et Barsac, dressed in their official robes and hats entered and seated themselves at the long head table facing the contestants.

So started the final round of the 2013 Left Bank Bordeaux Cup, a unique wine competition, conceived about a decade ago by Baron Eric de Rothschild, the family patriarch who oversees the Domaines Lafite Rothschild, an umbrella company that owns vineyards and wineries all over the world.

The dramatic setting aside, the event reminded me of the old TV show, College Bowl, except the questions are all about wine–not wine in general, only the wines of Médoc, Graves, Sauternes and Barsac. 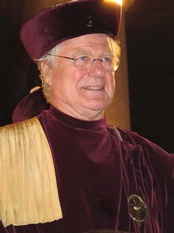 business schools.  Reaching out to Bordeaux’s traditional market, Rothschild invited the wine clubs of Britain’s Oxford and Cambridge Universities to the competition a couple of years later.  Then, in 2011, in what turns out to have been an even more brilliant move, he and the Commanderie du Bontemps de Médoc et des Graves Sauternes et Barsac, a group whose purpose is to promote the wines of their appellations, expanded the competition to include graduate and professional schools around the world.

From a marketing point of view, the inclusion of professional schools from around the world made perfect sense.  These are the future movers and shakers–and the ones who, along with their friends, colleagues and business associates, who will be able to afford the wines.  Who better to be emissaries of these prized wines?

The Who’s Who of Professional Schools

Test yourself with these three (answers at the end of the column):

1) Which of the following properties was not included in the Médoc Classification of 1855?  A) Château Siran, B) Château Dauzac or C) Château Dubignon.

2) Château Coutet, Château Filhot and Château de Malle are all:  A) in the same category in the 1855 Classification, B) located in the same village, or C) were owned by the same family in 1855.

3) Which of the following properties is classified only for red wine? A) Château Malartic-Lagravière, B) Domaine de Chevalier, C) Château Fieuzal, or D) Château Olivier?

The next questions tested the contestants’ tasting acumen.  Each team was given three unknown red wines and was asked a series of questions about them.

It started well, with all teams successfully ordering the wines from youngest to oldest as requested.   The teams struggled with the next two questions,  “Which is from the Haut-Médoc appellation?” followed by, “The other two are from the same appellation.  Which is it, Pauillac, St. Estèphe, Margaux or Pessac-Léognan?”  No one identified what was revealed as the 2005 Cantemerle as the Haut-Médoc, and only Wharton identified the other two (2002 Fieuzal and 2007 Haut Bailly) as coming from Pessac-Léognan.

The judges set the bar impossibly high with the final reds.  Each team was given a different unknown red wine and asked to speak about it for two or three minutes, then to identify it by vintage and appellation, and for extra credit, to name the château.  It reminded me of what Harry Waugh, a prominent English wine writer and former director of Château Latour, answered when asked if he had ever confused Burgundy with Bordeaux.  “Not since lunch.”

No team discerned the appellation or the château.  Only Yale and Cambridge correctly identified the vintage of their respective wines.

Appropriately, the final round consisted of three unknown wines from Sauternes and Barsac with questions like, “Two are from the same vintage.  What is the vintage and which one is from a different vintage?”  And then, the clincher, “Which one is from Sauternes (as opposed to Barsac)?”  The teams did surprisingly well with this series of questions.

Those who still might have the illusion that tasting wines blind is easy should try it at their next dinner party.

After considerable deliberation and talking among themselves, the judges crowned the Cambridge team the winner and Baron Eric handed them a double magnum of 2002 Château Lafite.  The real prizes were the several days all the contestants spent in Bordeaux prior to the competition visiting and dining at the top château.  For the third time, the team from Wharton came in second place.

Although the winning team hailed from Cambridge University, none of its members are English.  Their leader, David Beall, the President of the 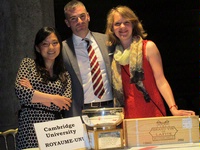 Cambridge University Wine Society, doesn’t exactly fit the wine geek profile.  A paratrooper and Major in the US Army, he served tours of duty in Iraq and Afghanistan before studying international relations at Cambridge.  And as though his impressive credentials aren’t sufficient, he demonstrated his ability as an opera singer at the celebratory dinner held in Lafite’s vat room later that evening.  The other two members of the Cambridge team were Ellie Kim, a South Korean, and Vaiva Imbrasite, a Lithuanian.  Sporting a Union Jack tie, the national origin of Richard Stibbs, Cambridge’s coach and President of Downing College, was readily apparent.  In typical British understatement he admitted he did “some coaching,” but felt that the team’s strength came from Cambridge’s having “a cellar full of excellent claret. . . and they get to drink it.”

Along with Sarah Kemp, Publishing Director of Decanter, and Robin Kelley O’Connor, an American who is a world-class expert on Bordeaux, I awarded the Press Trophy to Laura Femino from Yale Law School because of her articulate and down-to-earth presentation of their unknown red, which they thought was the 2005 Château Pichon-Lalande, but turned out to be the 2005 Château Haut-Marbuzet.  To Yale’s credit, Haut-Marbuzet, similar to Pichon-Lalande, has an unusually high proportion of Merlot in the blend and hence gives it a style that is slightly atypical for its appellation.

Within hours of the completion of the competition and at the sumptuous dinner that followed, where Carruades de Lafite and Château Lafite flowed freely, participants could be overheard planning strategy sessions for the 2014 “College Bowl.”