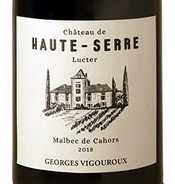 The Vigouroux family, owner of Château de Haute-Serre, is legendary in Cahors.  If not the best producer in that region, they certainly rank with the top ones.  Though best known as an Argentinian grape, Malbec’s origin and traditional home is the Cahors appellation.  The popularity of the grape has so overshadowed the relatively unknown appellation in recent years that Vigouroux actually puts Malbec de Cahors on the front label, while relegating AOP Cahors to the back.  Lucter, the name of this cuvée, is homage to the last Gallic of the region to fight against Roman occupation two millennia ago.  The wine shows the beauty of Malbec when grown in the right place by and turned into wine by the right people.  It has the power expected of Malbec, but with uncommon suaveness and complexity.  This is not a monotonic big red wine, as so many Malbecs tend to be, but rather a Malbec with minerality and subtlety.  You don’t often see subtlety and Malbec in the same sentence, but this one has them both.
90 Michael Apstein Jul 5, 2022