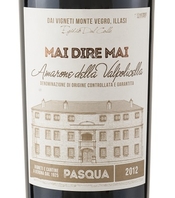 Never say never, the translation of Mai Dire Mai, as in “I never like Amarone,” is appropriate for this massive wine.  I’m not usually a fan of Amarone because they can be overwhelming.  And that’s what you’d expect from one with a stated-alcohol of 16.5 percent.  But, Pasqua manages to pull it off with this one because it is balanced. It delivers a wonderfully warming mixture of dried and fruit flavors wrapped in rather suave tannins.  You notice the alcohol — that’s the warming part — but it doesn’t burn.  It’s a steakhouse kind of wine, best consumed in subfreezing weather with snow on the ground.
94 Michael Apstein Oct 12, 2021