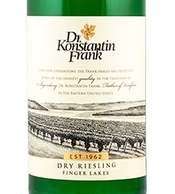 The story of the founding of the Dr. Konstantin Frank winery is nothing short of phenomenal.  He went from arriving in the U.S. in 1951 as an emigrant from the Ukraine, speaking no English and with virtually no money, to making one of America’s finest Rieslings from a place where no one had thought of planting that grape.  Frank, born in 1899, earned a PhD in viticulture in the Ukraine in 1930.  He survived the Russian Revolution and two World Wars before emigrating to the United States.  In 1958 he planted the first European grape varieties in the Eastern U.S.  on the shores of Keuka Lake.  Today, four generations later, Dr.  Konstantin Frank is one the leading Riesling producers in the United States.  Their 2018 Dry Riesling delivers a mineraly edge coupled with an invigorating zestiness.  Weighing in at a modest 12% stated alcohol, it displays good depth and concentration.  It’s a great choice when a plethora of flavors are on the table because its acidity will cut through anything.
91 Michael Apstein Sep 14, 2021