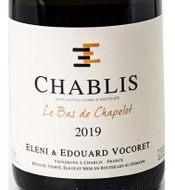 Eleni and Edouard Vocoret are new kids on the Chablis block.  Chablis-lovers would be wise to remember their names.  Their domaine, not even a decade old, is spread over about a dozen acres in Chablis.  Traditionally, producers in Chablis have not focused on its lieux-dits (named sites) that are under the village umbrella compared to say, Meursault, for example.  That’s one thing that distinguishes Eleni and Edouard Vocoret from the pack.  They bottle several Chablis from specific plots spread across the appellation.  Eleni explains that they wanted to show the differences among the plots since they were working them all the same way and vinifying the wines similarly.  The other thing that distinguishes them from the pack is the high quality of their wines.  This Le Bas de Chapelot has strikingly good minerality and verve.  It outperforms many producers’ premier cru Chablis.  Don’t miss it.
92 Michael Apstein Apr 19, 2022