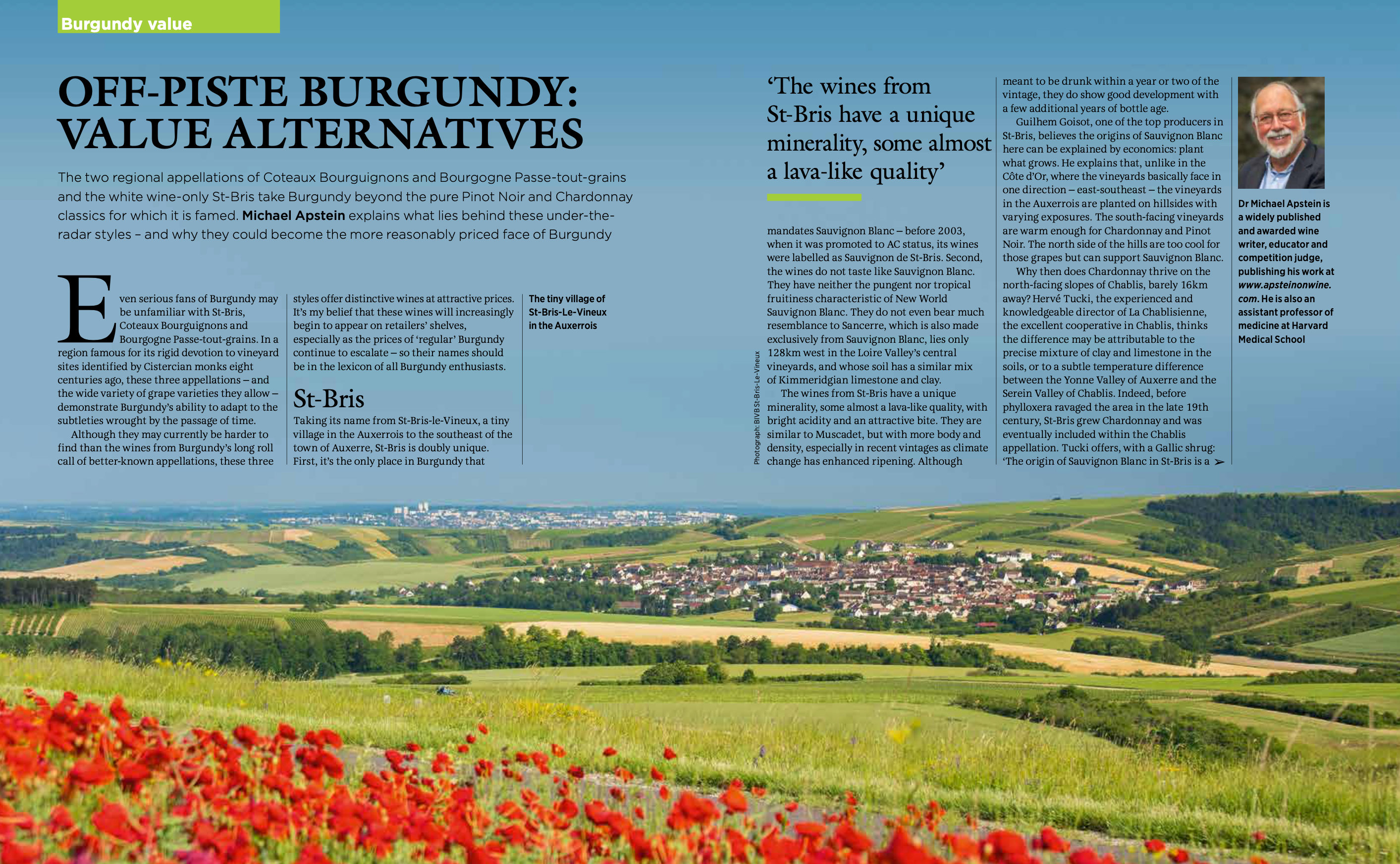 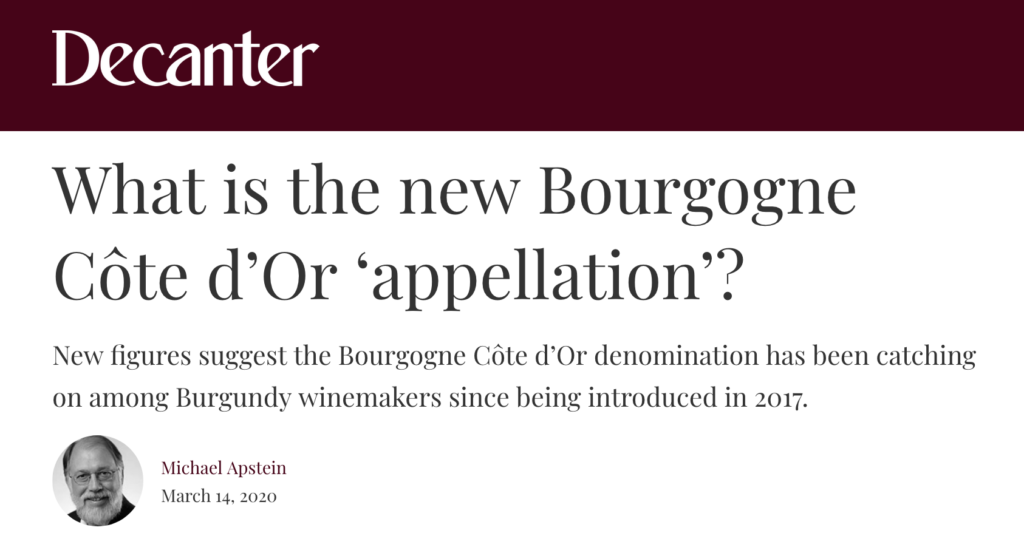 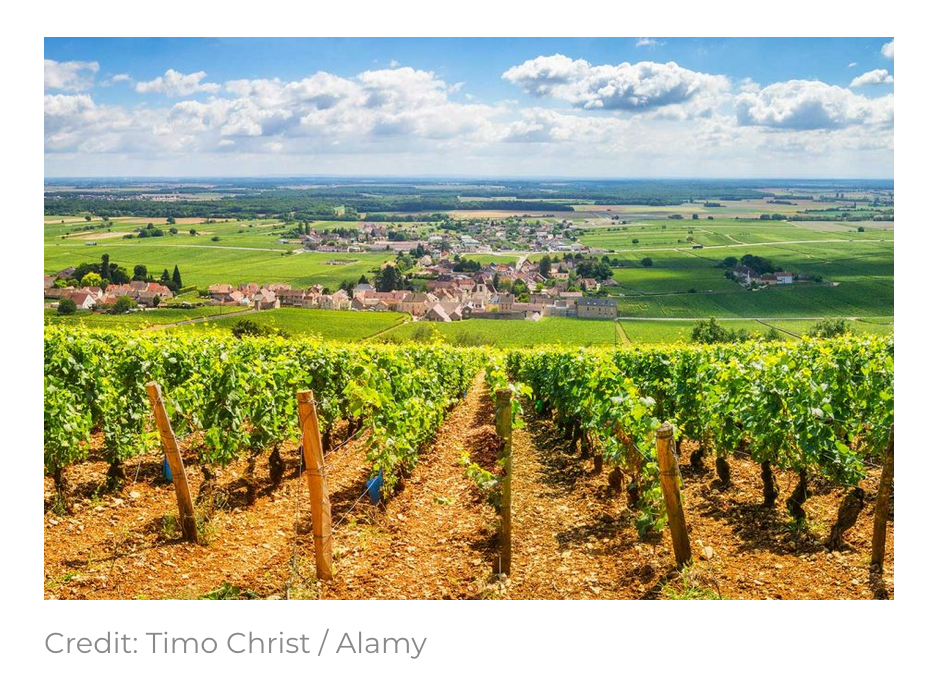 Why does the Bourgogne Côte d’Or appellation exist?

It is technically a new geographical denomination within the regional ‘Bourgogne’ appellation.

Its aim is to highlight the greater potential of the Côte d’Or, in the heart of Burgundy, to produce unique wines.

Therefore, regulations require the exclusive use of Chardonnay and Pinot Noir grown there.

Since it’s designed to be a cut above the regional Bourgogne appellation, the yields must be lower compared to wines labelled simply Bourgogne, which may contain grapes grown anywhere in the wider Burgundy area.

Anyone who has been disappointed by a thin Bourgogne Rouge, which turned out to be made entirely from grapes grown in the less prestigious parts of Burgundy, will appreciate the new appellation.

Where does it sit in the Burgundy hierarchy?

It is one of the 14 geographical denominations that sit within the regional Bourgogne appellation.

It sits above regional Bourgogne appellation wines and just below village-level wines, a spokesperson for Burgundy’s wine council, the BIVB, told Decanter in 2017.

The area covered includes Côte d’Or vineyards spread across 40 villages along a 65km stretch from Dijon to Maranges, spanning the Côte de Beaune in the south and Côte de Nuits in the north.

Who is using Bourgogne Côte d’Or on wine labels?

Some critics and producers have questioned whether a new appellation could confuse consumers, given the already-complex nature of Burgundy’s climats.

Yet, several winemakers and merchant houses have embraced the Burgundy Côte d’Or tag.

Around 1.6m bottles of Bourgogne Côte d’Or red wines were produced from the 2018 vintage, up by 20% on the inaugural 2017 crop, according to the BIVB.

Much of this volume comes from top négociants.

Maison Latour is now making both a red and white Bourgogne Côte d’Or, while Louis Jadot is making a red.

Bichot has changed the label of its Secret de Famille from Bourgogne Rouge to Bourgogne Côte d’Or, since the grapes traditionally have come from that part of Burgundy.

Some top growers are also on board. Pommard’s Domaine Parent has started using the new appellation for its Cuvée Pomone, and Meursault-based Michel Bouzereau has begun labelling its Clos du Moulin as Bourgogne Côte d’Or.

These wines were formerly labelled Bourgogne Rouge and Bourgogne Blanc respectively, but have always met the requirements of the new appellation.

It’s still early days, but there has been an assumption that ‘Côte d’Or’ wines would generally cost more than those labelled simply as Bourgogne.

One trade figure told Decanter in 2017 that prices could be around 20% higher on average.

However, many factors affect price, from policies of individual growers and harvest size to currency swings and also international trading conditions; witness the recent 25% import tariffs placed on certain European still wines entering the US. 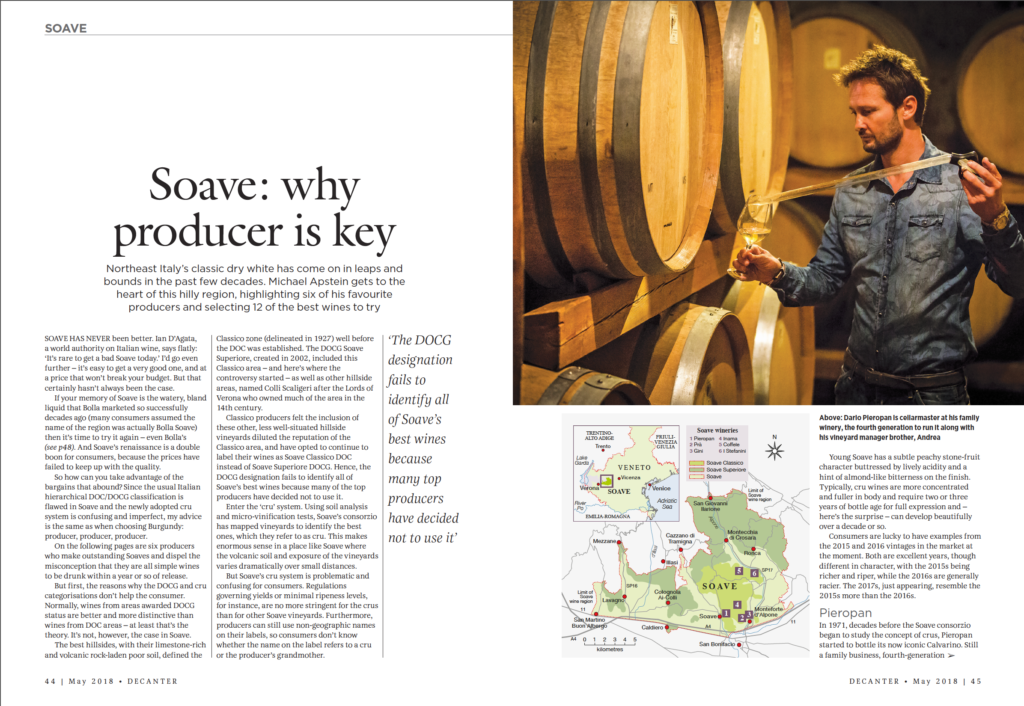 Joyce Jones, Birmingham, asks: Is an alcohol unit the same in the UK as it is in the US or Europe, and what is the difference between a unit of wine and a unit of spirits? Am I better off having a shot of vodka, for example, than a glass of wine?

The British government introduced the concept of a ‘unit of alcohol’ in 1987 as a way for individuals to measure the amount they consume because wine, spirits and beer vary in the amount of alcohol they contain.

One unit of alcohol equals 10ml

One unit of alcohol equals 10ml, or 8g, of pure alcohol whether it comes from wine, spirits or beer.

It’s a way of standardizing the playing field because a ‘glass of wine’ or ‘a shot’ is an imprecise measurement.

Similarly for spirits, it depends on the size of the shot. In England and Wales, one shot is 25ml, whereas, in Scotland and Northern Ireland a standard shot is 35ml. Hence, a shot of vodka (40%abv) in London has one unit of alcohol, but in Edinburgh it has almost 1.5.

So if by ‘better off’, you mean what is potentially less harmful between a glass of wine or a shot of vodka, then it depends on the size of the glass or shot, what you mix the vodka with, over what period of time you drink them, whether you eat or not, and, of course, your overall health.

UK government guidance on drinking introduced in January 2016 said that no one should exceed 14 units per week.

The USA have health guidelines in based on the Standard Drink measure which can be used to benchmark alcoholic drinks in the same way as the UK. In the US, the measurement changes with one unit of alcohol being 14g of pure alcohol or 5 fl. oz. It is used as a guideline for how many drinks a day you can consume, as well as for other alcohol related health measures.

“Tuscan white: 20 top Vernaccias,” Decanter Magazine, August 2016. Click the image below to read a pdf of the article. 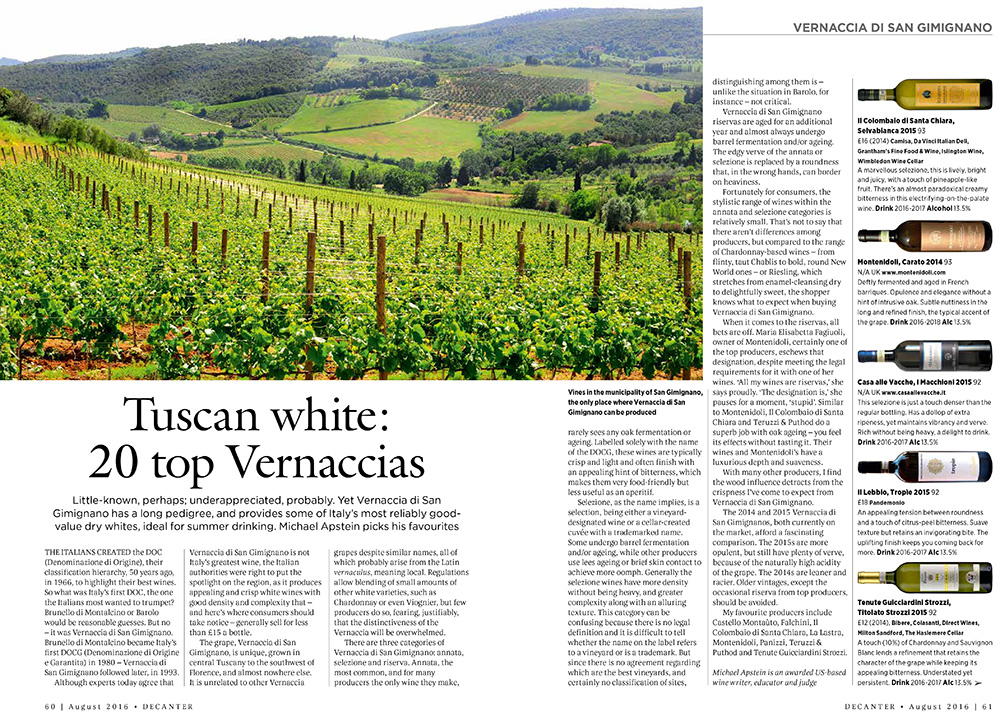 Is it necessary to have ‘several alcohol free’ days every week and, if so, should those days be consecutive? Dr Michael Apstein, in the rare position of wine writer and liver doctor, gives his view to Decanter. [Read more here]

Following a very merry Christmas, are you in the first few days of a self-imposed dry January?  With indepth knowledge of both medicine and wine, Dr. Michael Apstein explains how our bodies process alcohol and whether a New year detox really works. [click here to read the article] 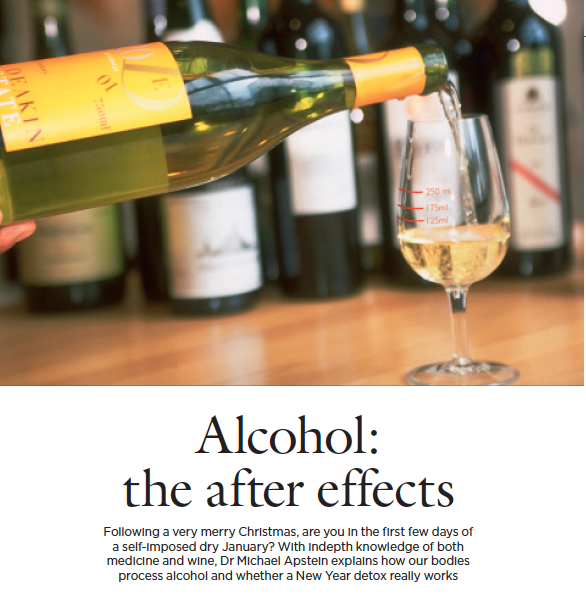 Started from scratch less than a decade ago in a remote valley to the south of the Chilean capital, this ultra-modern estate was born of the vision of an entrepreneur from Norway. Michael Apstein charts the development of its singular wine, a blend that brings together Bordeaux know-how with essential Chilean character. [click here to read the article] 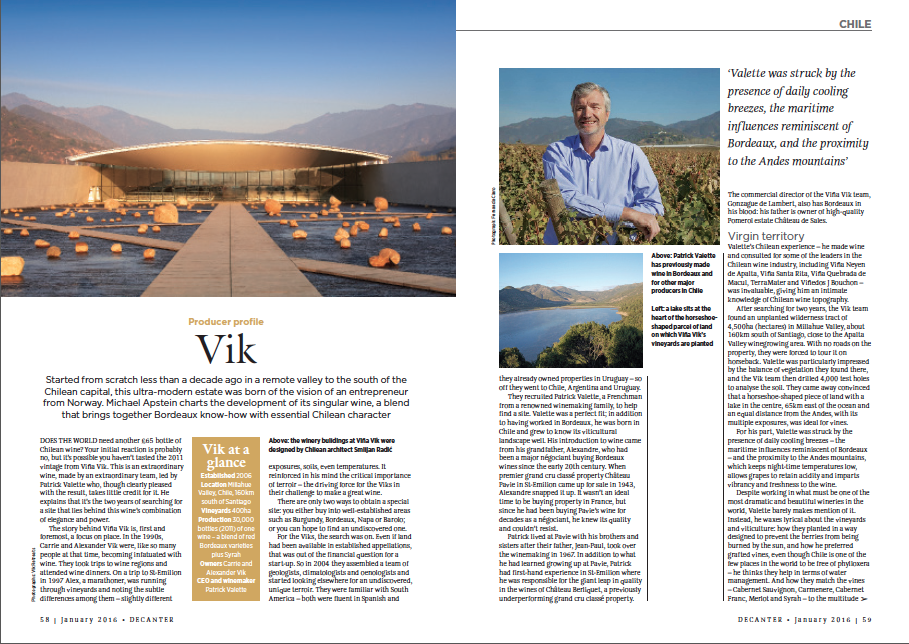 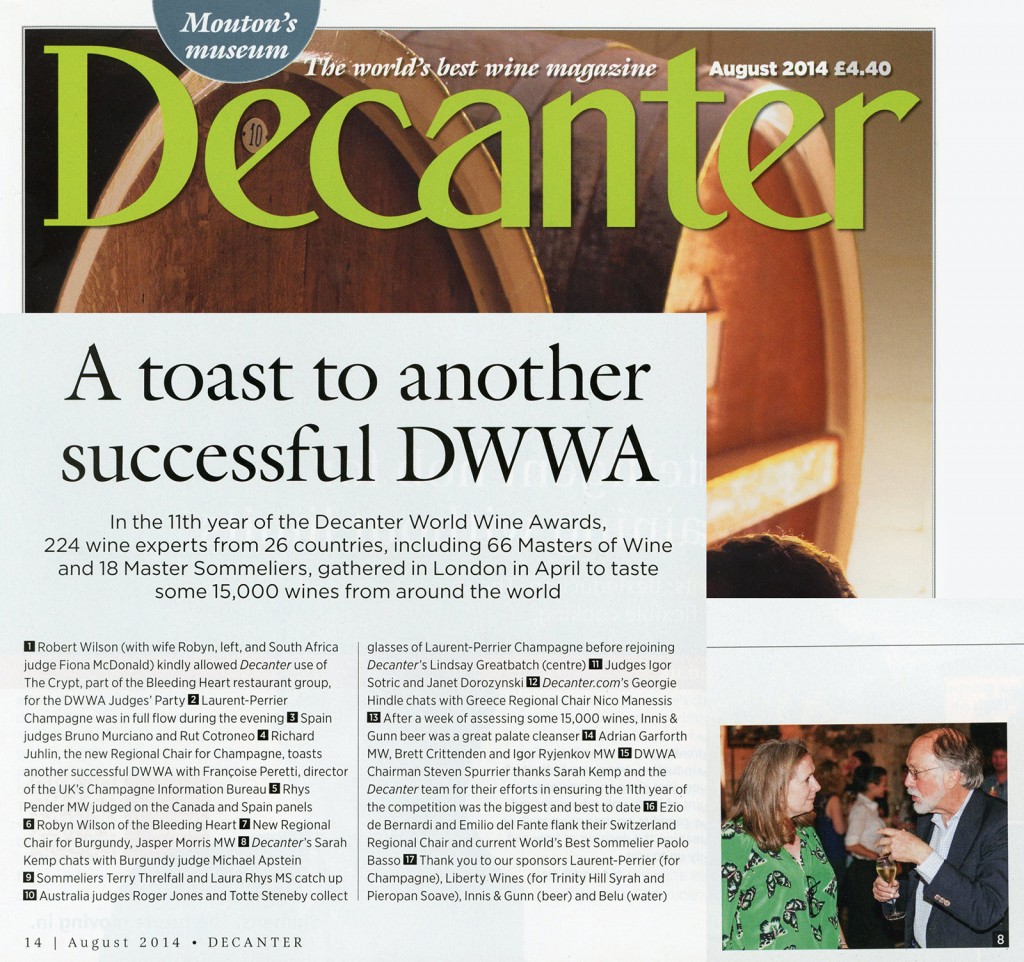