Move over Brunello, Chianti Classico and Vino Nobile di Montepulciano.  There’s a new kid on the Tuscan block, Montecucco, which is positioned to join this elite trio of regal red wines.  With only 2,000-planted acres and about 70 small producers, Montecucco is tiny.  But remember, as recently as 1980, when Brunello was awarded Italy’s top official wine designation (Denominazione Origine Controllata e Garantita, or DOCG), it was also a small area with only about 50 producers.

Two essential characteristics of great wines are that they clearly reflect their origins and that they develop complexity with bottle age.  I don’t yet have enough experience with how the wines of Montecucco develop with 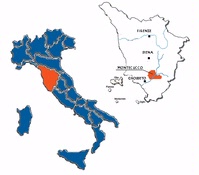 bottle age, but I can assure you that the wines from this area–located a stone’s throw from the Brunello di Montalcino zone–clearly reflect the rugged mountains and the volcanic soil of the area.

The red wines, composed primarily of Sangiovese, command center stage, but the whites, made mostly from Vermentino, should not be ignored.  One sip of Peteglia’s refreshingly crisp and aromatic 2013 Montecucco Vermentino drives that point home.  The reds are deep and mineraly with lovely austerity and length.  They are not the aperitivo type of wines, but rather the ideal match for charcoal grilled steak or roasted leg of lamb.  Though they convey plenty of dark black cherry-like fruitiness, they are not fleshy, fruit driven wines. Their stature comes from their dark brooding nature with a delectable trace of bitterness in the finish.  The reds are not opulent blowsy wines, but rather precise and cutting, in a nice way.  Indeed, some of the reds are reminiscent of Brunello, but at a fraction of the price.  But that won’t last.  In ten years, I predict that we’ll see some Montecucco Sangiovese Riserva commanding Brunello-like prices.

Montecucco Rosso, like many Rosso from top areas–think Rosso di Montalcino–provide an excellent introduction to the area.  They convey the region’s minerality and character, but with softer tannins that make the wines more approachable when young.  To my mind, sacrificing the complexity and depth that the DOCG wines offer for approachability is a reasonable trade-off when exploring a new area.  I fail to appreciate the rationale behind a Montecucco Rosso Riserva since many I tasted were as sturdy as the Montecucco Sangiovese, without the complexity and length of those DOCG wines.

IGPs are a Two-Edged Sword

Many of the producers are young and eager to experiment making wines using the so-called international varieties, Merlot, Cabernet Franc and Cabernet Sauvignon, under the IGP (Indicazione Geografica Protetta, formerly IGT) designation instead of adhering to DOC or DOCG regulations. Giovan Basile, owner of Basile, a top Montecucco producer, planted Merlot, as many before him had.  He says that he thought it might round out the Sangiovese, especially those from young vines, which can be quite aggressive.  But Basile discovered that the Merlot took the character of the land and didn’t “disturb” the Sangiovese at all.  Indeed, Baslie’s 2009 immediately enjoyable Montecucco Sangiovese “Cartacanta,” which contains a dollop (10%) of Merlot, conveys earthy black cherry-like notes and lovely firmness characteristic of Sangiovese.

This experimental mindset might well make for fascinating and unique wines, but it also acts as great hurdle for the consumer.  The problem is that the only currently applicable IGP for the wines from Montecucco is Maremma, a vast area extending all the way to the Tuscan coast.  The international varieties planted near the coast, where the DOC of Bolgheri is located, make wines that are fleshier than the firmer and more mineraly Cabernet and Merlot planted in Montecucco, which is not surprising given the vast difference in climate and soil.

The wines from the top-notch producer, Poggio Mandorlo, are a good example.  Erik Klein, their export manager, explains, “We have a variety of volcanic soils–marl, limestone, calcium-rich clay–that are excellent for Merlot and Cabernet Franc.”  Though they produce a superb Montecucco Sangiovese “La Querce”–a beautifully muscular wine with the tautness of a gymnast–their flagship is an IGP Maremma Toscana, an engaging earthy blend of Merlot (70%) and Cabernet Franc, whose austere and laser-like definition is entirely different from similar blends crafted on Maremma’s coast.  Carrying the IGP Maremma is confusing and could lead the consumer astray because that designation doesn’t distinguish between Montecucco or the coast.  A distinct IGP for Montecucco would solve that problem.

The area is filled with small estates, which makes the wines from any one producer difficult to find.  Even the largest producer, Colle Massari, has an estimated annual production of only about 140,000 bottles.  Most producers have less than 10 acres and produce only about 12,000 bottles annually.

Poggio Stenti could be the “poster-estate” for the region.  Eleonora Pieri, a charming and enthusiastic young woman, manages the family’s property.  Her father, Carlo Pieri, is the well-regarded butcher who owns Macelleria Norcineria in Sant’Angelo Scalo (which happens to be in the neighboring Montalcino zone), whose salume is known throughout Tuscany.  For years, the family made wine for their own consumption and for that of friends. Then, about 10 years ago, they built a cellar and debuted commercial production with the 2006 vintage.  They started with about 5 acres of vines and have planted another 5 acres, but their total production is still barely 10,000 bottles.  Their current releases, a 2011 Montecucco Rosso, “Tribolo,” ($22), which shows the “not just fruit” side of the DOC and a far more serious and complex 2008 Montecucco Sangiovese Reserva whose power and grace is remarkable (about $30), are both easy to recommend.

Marco Innocenti echoes the enthusiasm and pride of the Piera family, noting that most of the wineries in Montecucco are, indeed, family affairs.  He describes his as an “agricultural family.”  His brother is the agronomist.  His mother and farther still work on the farm, which comprises about 100 acres, but only about 15 of them are devoted to vines.  The remaining land is for olive trees, cattle, and other crops.  They even run a small agriturismo.

It is frustrating that, with such small production, the wines from any single producer are almost sure to be difficult to fined.  If you can’t find wines from any of these producers, I suggest you just ask your local retailer for any examples of wines from Montecucco so you can see if they hold as much fascination for you as they do for me.